Primeval: Shadow of the Jaguar

Moving right along in my backwards trek through the Primeval extra-adventure novels, I come to Shadow of the Jaguar, the predecessor of the three I have already read, The Lost Island, Extinction Event, and Fire and Water, and the last one left (for all that it is the first one chronologically and published). As I had failed to mention last time, Shadow of the Jaguar takes place between episodes 2.3 and 2.4, and The Lost Island follows immediately after this book. 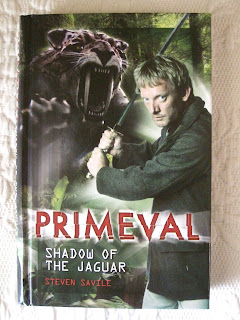 And I can certainly say I enjoyed this one more than The Lost Island, which I would label the weakest of the four. While Shadow of the Jaguar, like the rest, has some random tidbits, it also has some explorations of character, particularly concerning the Cutter/Claudia Brown-->Jenny Lewis thing. While Cutter remains fairly close-mouthed about the issue (as he generally is about most topics) in the show, this book explores some of the things he may have been thinking--this is the type of extrapolation I had hoped to get from these books.

The plot comes to a pleasing, slightly unexpected climax at the end and is a good segue into the mythological connections that come up in Season 3. While Cutter and Jenny, along with one or two new characters, take most of the attention, there are also a few moments with Connor and Abby (oh, and Stephen--but I mostly lost interest in his character after the end of Season 1). With Lester, too--you have to love that he gets the last words in the book (and what wonderful Lester-esque words they are).

So not too bad. Definitely worth reading for the Primeval addict. But now I am left sad that all my four candy books are finished.
Posted by Deanna Skaggs at 11:49 AM