Jane Eyre as a Graphic Novel

Mostly I was just curious what a graphic novel version of Jane Eyre would be like. The only graphic novels I have read (unless you count The Invention of Hugo Cabret) are the Twilight ones (click for Vol. 1 and Vol. 2), but I did enjoy those.

This one is part of the Classical Comics series, designed with the aim of inspiring new readers (especially younger ones) of these works. They offer both Original Text and Quick Text versions, as well as Plain Text for Shakespeare adaptations. My copy of Jane Eyre is Original Text, with script adaptation by Amy Corzine and artwork by John M. Burns. 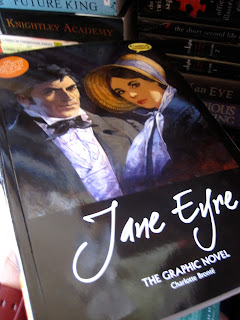 It may be Original Text, but this is of course still a highly abridged version of the original novel. It's compressed into around 130 pages and is therefore missing many scenes, lines, and descriptions. At first, it bothered me to have so much missing and for scenes to move so quickly into one another, often with too-abrupt transitions. But I imagine there was a set length limit that everyone involved in making this book had to stick to. If they had been able to do a five volume book, the result would have been different. It would also have defeated the purpose of Classical Comics--inspiring interest in a different group of readers. A long and unwieldy text wouldn't do that.

So given the constraints, this adaptation is nice. Naturally, there is more dialogue preserved than anything else. While some lines are cut out, I found that many of my favorites remained, allowing me to relive my experience reading the novel. We don't find out quite all the details of the story, but we have the important parts. And if the graphic novel does inspire interest in a reader, he can move on to read the original novel.

While I found myself really enjoying the artistry of the Twilight graphic novels, I felt that much less with this one. There was less of a sense of movement across the images, and my eyes drifted mainly to the text and not as much to the images. Part of this is because we're dealing with Victorian novel speech: it takes up more space, even abridged. And while I thought St. John should have looked younger, Bertha was frightening--there was a sense of movement when she was on the page. The proposal scene, the call, and the destruction of Thornfield were also rather nice in terms of imagery. So while the artwork didn't put me in awe overall, there were moments that I enjoyed. Reading this book was much like watching a subtitled film.

For "new readers," the book also includes a short biography on Charlotte Brontë, the Brontë family tree, a chronology, a copy of one of Charlotte's letters, and two pages showing how the text and artwork came together for the book. This is where you can see what the difference is between Original Text and Quick Text. Just from the examples they gave, I would highly recommend going for Original Text. Quick Text is so abbreviated that it hardly seems worth it unless perhaps for a very young or short-attention-span reader. It seems to take out anything unique to the story, making it into a summary with pictures. After all, even the Original Text gives you a much shorter version of the novel.

Posted by Deanna Skaggs at 1:35 PM