I'd rather watch a play than read it, not being an actor, director, or designer. But if I were to wait to watch every play, resisting reading it instead, well, I would be familiar with very few plays. 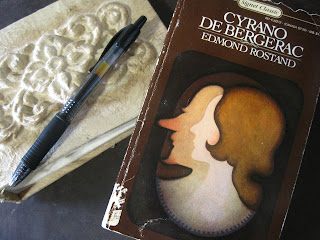 Cyrano de Bergerac is one of those stories I feel most familiar with because of the much-adored (by me) Wishbone. I didn't even know who had written it or when (Edmond Rostand; 1897). And I certainly didn't know that there was a real Cyrano de Bergerac, on whom the character is partially based. As I began reading (my aged 1972 edition translated by Lowell Blair that I picked up at Goodwill), I remembered that we also watched a movie version in my high school French class. I believe it was the 1990 production; I remember enjoying it.

So I was already familiar with the story, which I usually find helps with reading a play. And goodness, this is a fun story with witty and pretty dialogue.

The year 1897 makes me think of two other playwrights from around the same era, George Bernard Shaw and Oscar Wilde. They may have been British instead of French, but consider that they also were interested in language, perception, and role reversals--and aesthetics. Cyrano de Bergerac fits in very well these ideas. There are so many poets in this play, not even counting Cyrano. There is also the concept of split love since Roxane loves Christian for his face but comes to love Cyrano for his "soul." Rather than saying that this is a theme of the unfairness of Fate that can never pair beauty and wit or of the eyes to see what the soul wants to find, I'm interpreting Christian and Cyrano more in the sense of brothers.

When Cyrano dies, he tells Roxane to continue mourning Christian, but also perhaps to mourn him a little. In this way, Roxane has the ability to unite the positive traits of both men with her love. She need not choose one over the other, the face over the wit, because they are both dead. She never has the opportunity to make that choice. While we might like to hope that she would have chosen Cyrano, it is long after Christian is dead that she would have chosen him. What would she have answered if Christian had not been killed and Cyrano had told Roxane the truth there on the battlefield? We'll never know and it doesn't entirely matter: this is a story, a romance, and it allows for both sides. Like Roxane, the readers/viewers can mourn both Christian and Cyrano.
Posted by Deanna Skaggs at 11:36 AM