Just as a very dark chocolate tests the skills of a chocolatier, a sweet chocolate tests the grounds for a chocolate maker. If they can't put together sweet flavors in a way that is still gourmet, then they are making confections, not chocolate. So I consider it okay that, when I visited the Eclipse Chocolate cafe and shop, the one chocolate bar I picked up was a 38% milk chocolate, by name the Cinnamon Brown Sugar. I'm done with choosing chocolate because I think it's what I should be getting: I'll choose whatever I feel like instead. If it's a sugary milk chocolate, then so be it. I'm the one who's going to be eating it, anyway. (I really need to elaborate someday on my progression from very dark chocolate when I was younger to more milk chocolate as I get older . . . ) 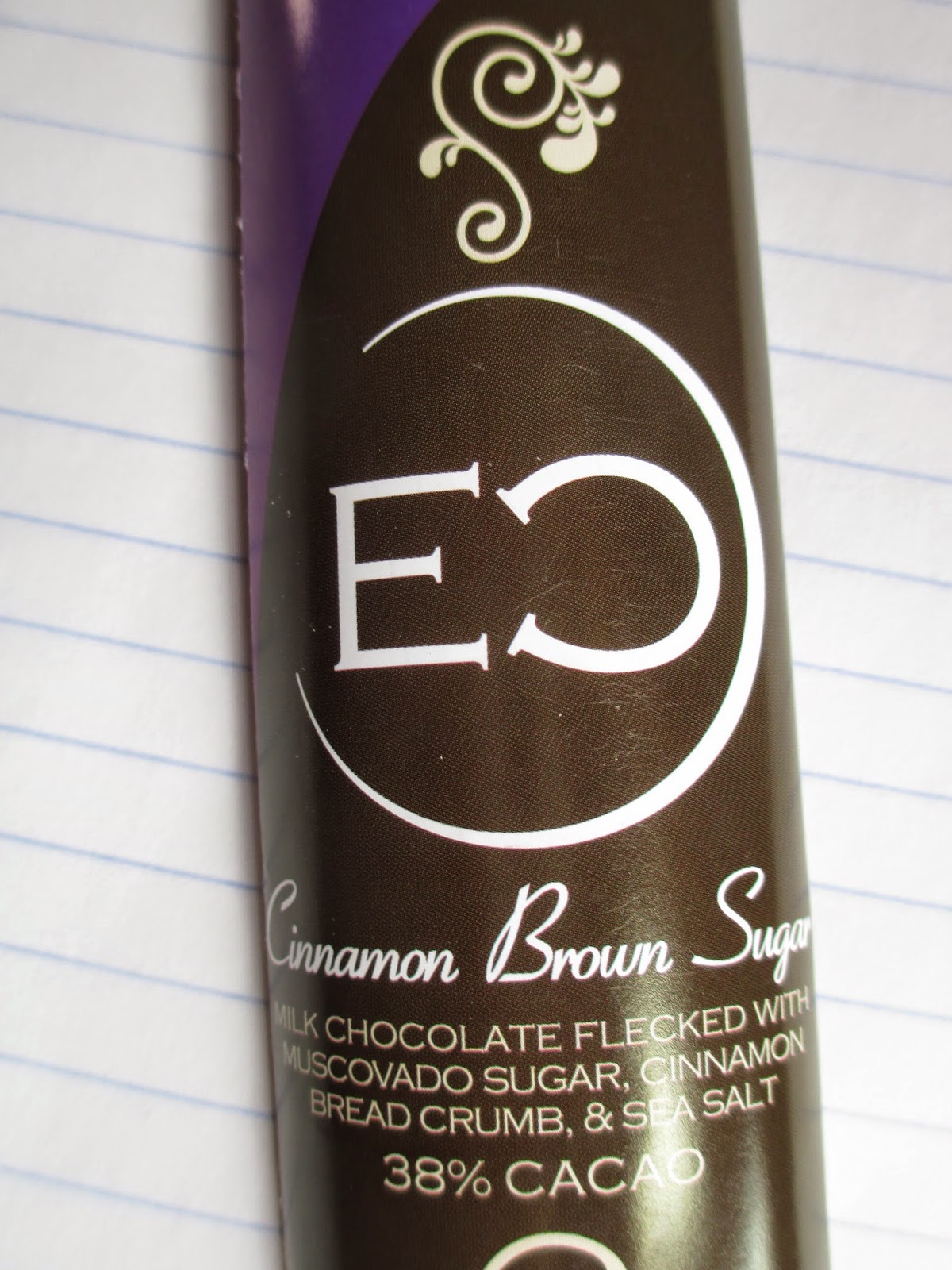 At about nine inches, this 75 gram bar stretches across a whole page of paper. You don't usually see such long bars of chocolate; I'm not sure whether or not I like the shape. It does, however, remind me of the candy bar Charlie bought in Willy Wonka and the Chocolate Factory--which makes me further glad that I picked out a sweet chocolate. I suppose the size makes it stand out and makes it recognizable. It somehow also looks both masculine and feminine at the same time; it's bold because it's different, and yet it's sort of delicate because it can break more easily than a flat bar. 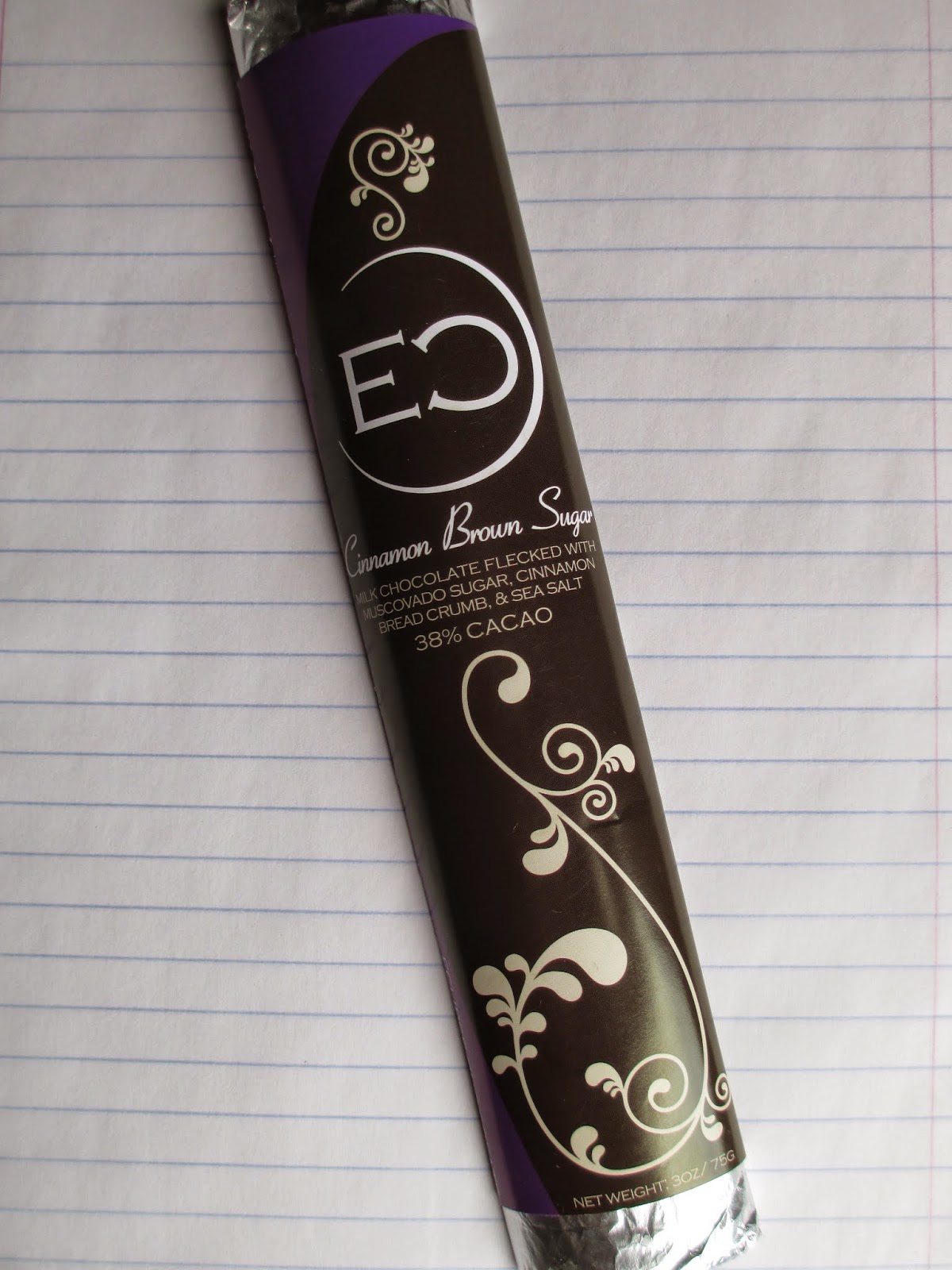 The bar is divided into nine chunks. They're tastefully shaped so that the curve of the chocolate echoes the curve in the Eclipse logo. But while the large size of each piece seems to fit milk chocolate, I can't find myself liking this size for a more serious dark chocolate. Maybe that's the idea: maybe Eclipse Chocolate doesn't want to be overly serious.

This chocolate smells wonderful. The description calls it "milk chocolate flecked with muscovado sugar, cinnamon bread crumbs, and sea salt." That description has promise in it. Cinnamon is wonderful in chocolate, a rich-tasting sugar sounds good, and sea salt is the popular addition these days. The aroma is intense cinnamon, like from fresh churros. It's very sweet, like the sweetness of a thousand desserts. 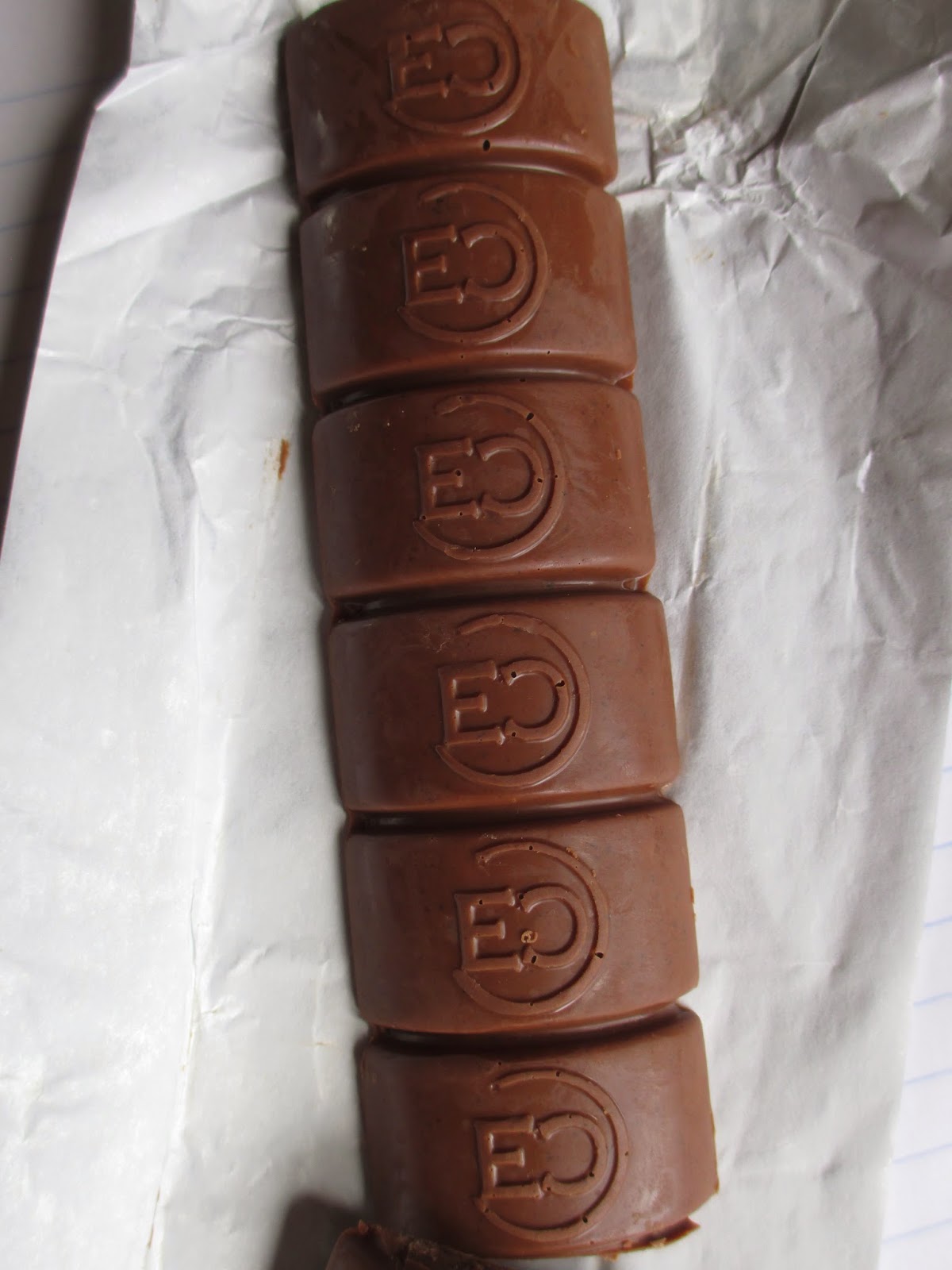 When you bite in, the tendency is naturally going to be to keep on chewing: all those tiny bits of toasty bread have to be crunched. As you crunch, you come across the sea salt here and there and it helps to take off some of the edge of the sweetness. So you're crunching through bread crumbs, melting through chocolate, and sucking on salt all at once. Although 38% cacao isn't the lowest percentage as far as milk chocolate goes, this one ends up feeling rather on the lighter end of things, probably because of how many flavors it has to compete with. And on top of the sugar that was already in the chocolate, Eclipse added the muscovado sugar, so this is quite a sweet chocolate bar. 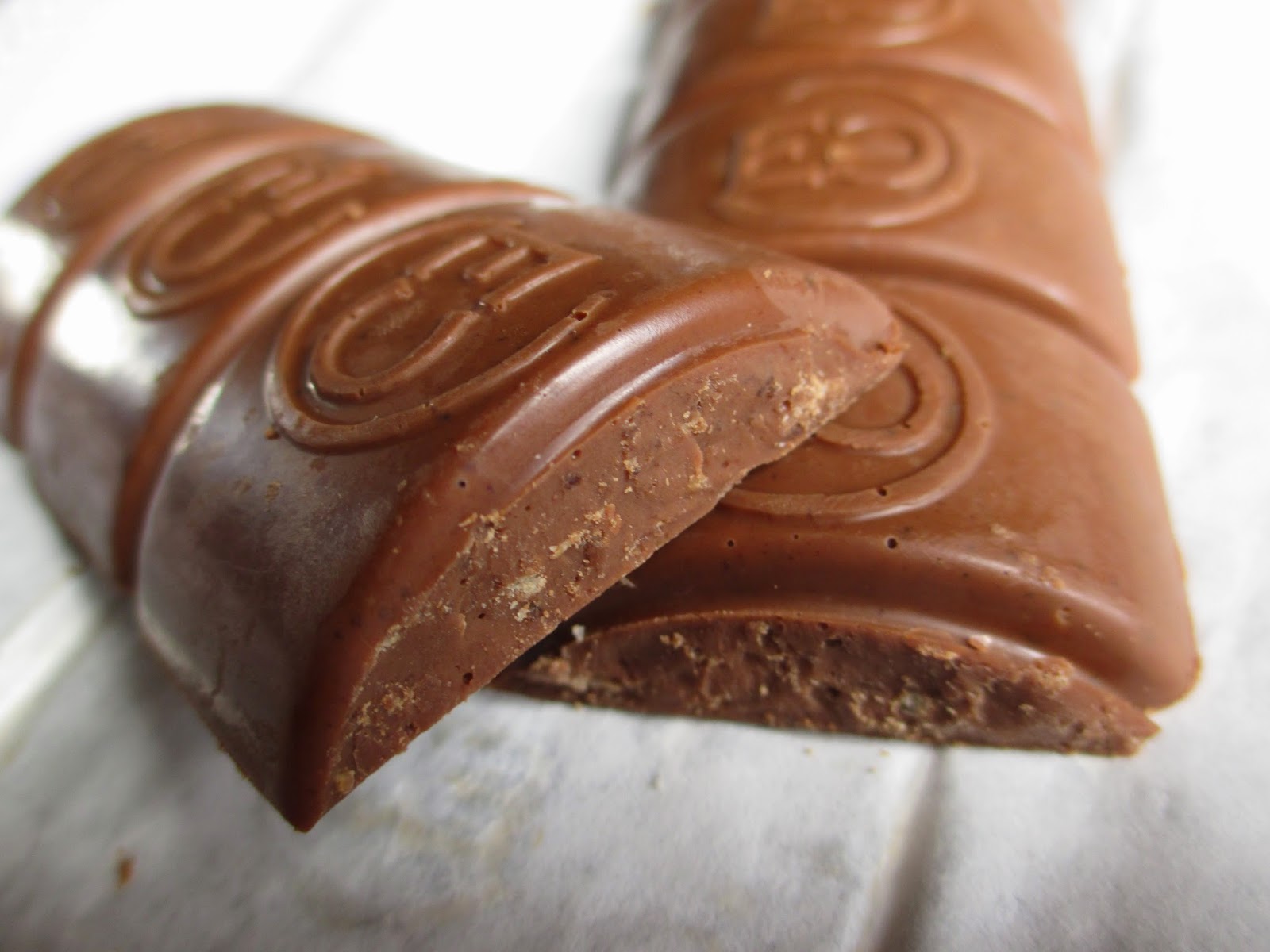 Yet I think I would still call it a gourmet candy bar. It satisfies the sweet tooth, that's for sure, but sometimes we need things to satisfy our sweet tooth. And why reach for a Milky Way that's going to disappoint you with its cardboardness halfway through when you can have a sweet bar that still has some thought behind it? Sure, it's a tad on the greasy side, but the overall combination of ingredients and flavors is quite nice. The milk chocolate, the cinnamon, and the sugar are the familiar and safe ingredients. The salt adds a contemporary, more adult edge to it. And the bread (which I have only had in one other bar, from Theo) adds something silly that also makes a lot of sense. Just picture a piece of toast with sugar on top, a cup of hot chocolate with cinnamon, and a little salt to lick off of the palm of your hand. The Cinnamon Brown Sugar takes all of that and melds it into one seamless chocolate.