The Exploration of Chocolate

No, that is not a fancy title I made up for my rambling about chocolate discoveries. It is the name of a dessert I had while I was on vacation.

At the Omni La Costa Resort & Spa in Carlsbad, California, there is a restaurant called BlueFire Grill. And when I went to this restaurant, I ordered a dessert called The Exploration of Chocolate. Pastry chef Jaimie Hileman oversees all of the desserts and baking at the resort. I thought that I would just peek at the dessert menu, but I ended up wanting to try everything on it. It all sounded like it had thought behind it, as much thought as went into the food. For me, a bad dessert can easily break my opinion of a restaurant--and it can be quite hard to find good dessert. 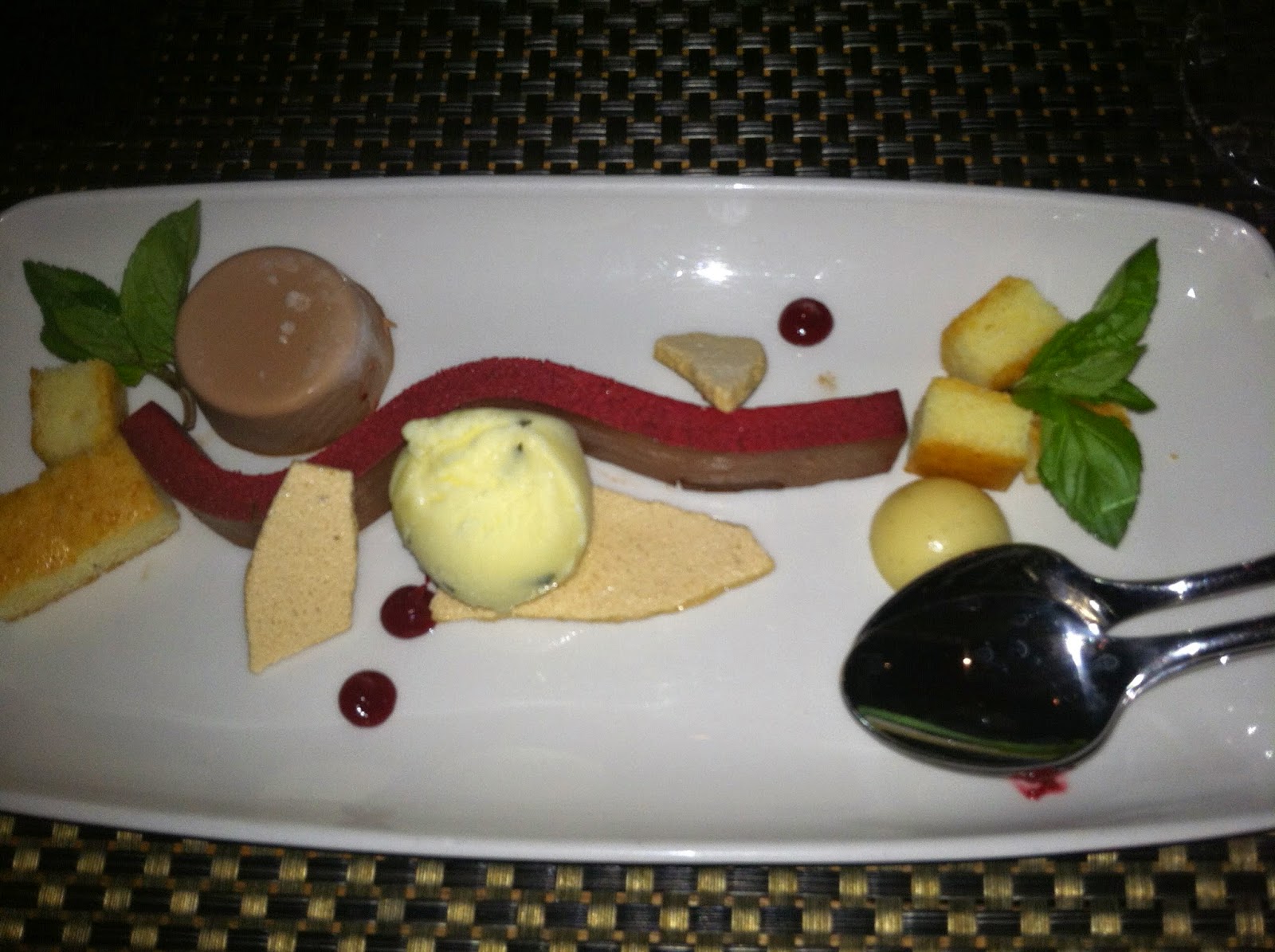 I was at first hesitant to choose the Exploration, despite the assumed great chocolate influence. My hesitation was based on one of three listed elements: white chocolate orange cake (unless it was lemon and I'm just remembering it as orange? I'm sure it was orange). I don't much like lemon or orange, even if they're combined with chocolate. But I was surprised to enjoy even this element of the mix.

Having brought with me only a small purse, I didn't see the need for my camera, so you'll have to make do with a hastily-snapped phone picture. The small squares of cake on the left and right are the orange cake. The snake in the middle is chocolate gianduja (basically creamy chocolate with hazelnut, if you're unfamiliar). The round spot on the top is a chocolate ice cream-like item; the white spot on the bottom is mint ice cream. The tiny circle over to the right above the spoons was vanilla. A couple of dots of raspberry, two pieces of wafer-like cookie, and two sprigs of mint complete it all. What this means is that there is a lot to look at and taste, but the plate isn't filled with a mound of sweets that can't be finished. This dessert is shareable, but doesn't have to be. I shared about half of the orange cake and some small tastes of the ice cream.

Now let me move on to describe why I was utterly enthralled by this dessert. You know I enjoy hazelnut and chocolate together, so the gianduja (and its large size in comparison to some of the other elements) was a big win from the start. It's creamy and light, with the right cocoa and hazelnut flavors. The white chocolate orange cake even was pleasant. Soft cake in small, bite-size pieces isn't overwhelming, and the orange flavor added an almost floral kind of mellow sweetness to everything. The mint ice cream acted like a palette cleanser for whenever you needed to move between elements or just get a fresh, clear taste into your mouth. But that chocolate ice cream. I forget what the menu called it exactly, but ice cream doesn't describe it; I just don't know what other word to use. It was cold, but it was also dense and very, very soft. With a chocolate flavor neither sweet nor rich nor boring, it was hopelessly elegant. And that dot of vanilla? I don't know what that was, either: it was like a drop of pure vanilla flavor, such a wonderful companion to the other elements on the plate.

Was I happy? Oh, yes. I would go so far as to call this one of the best desserts I've ever had. Admittedly, I don't often get to go to restaurants where they would have amazing desserts, but that fact doesn't diminish the worthiness of this one. It was also the perfect thing for after dinner. Sometimes, even a good dessert is difficult to finish or enjoy right after you've eaten. But this one was the right size to not be overwhelming. And while all of the flavors were entrancing, none of them were overly rich or overly sweet. It was all in perfect balance.

Posted by Deanna Skaggs at 1:12 PM