That's it, I'm moving: there just aren't any chocolate shops where I live. Not only are there none in the area, but in the whole state (sort of). It's terrible.

But I know, the lack of chocolate shops is just one of the prices I have to pay to live where it is beautiful. I know. And it's probably for the best, anyway: this way, chocolate remains special because it is more scarce. So any time that I go out of state, I try and look up chocolate shops around where I'll be. I usually try and visit at least one of them. So my "at least one" shop for the San Diego area was Eclipse Chocolate. I thought perhaps breakfast there would be nice since they also serve food, but that never happened. In addition to food, chocolate, desserts, hot chocolate, and tea, they also serve alcohol, so there is quite a variety of what they have on offer. It's nice to have options. 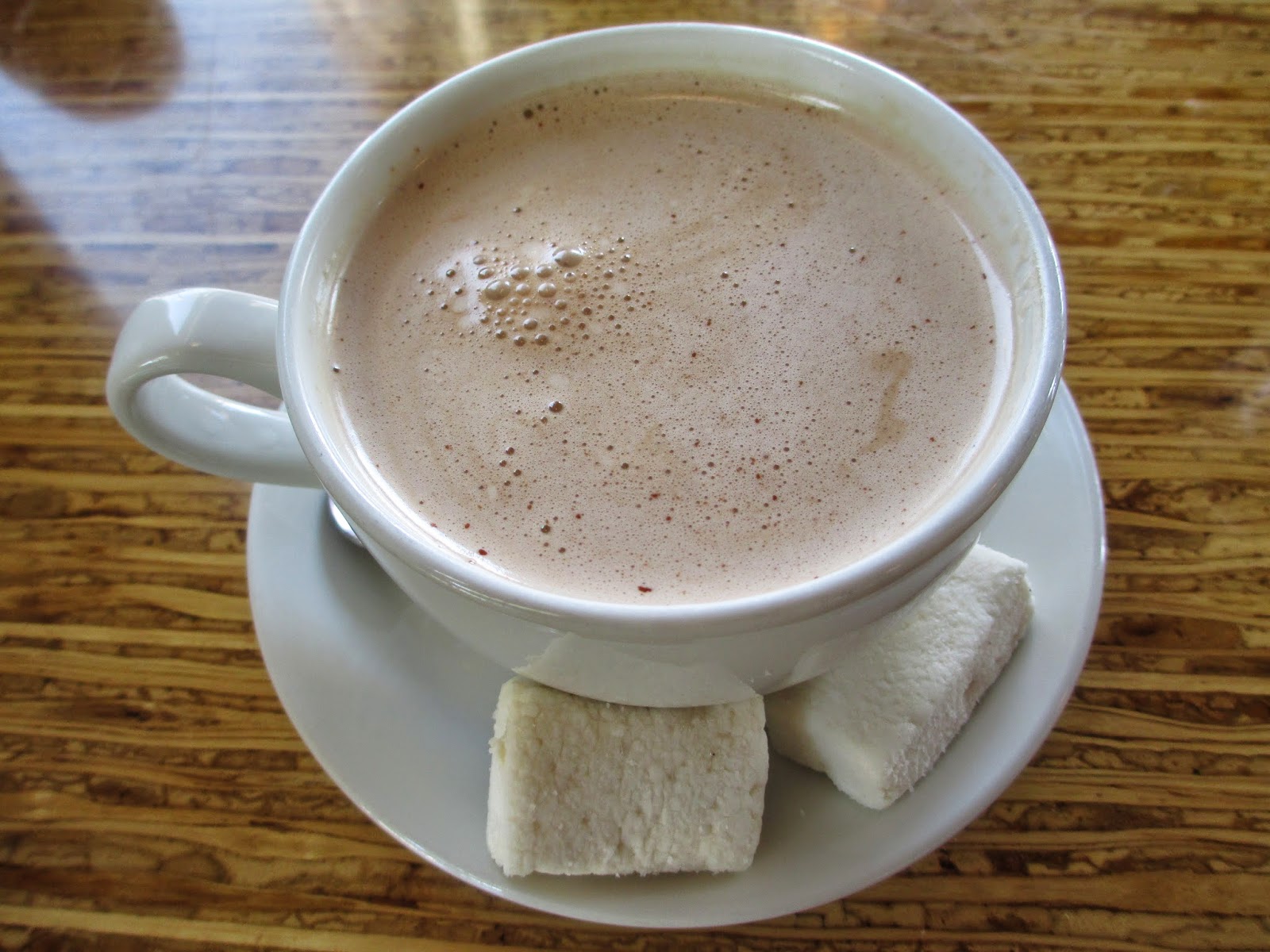 When I looked up the place, I saw that it was near Balboa Park, which is where the museums are. I thought, oh, good, it's near the fancy area. Well, the particular corner where the cafe is isn't particularly fancy--but the shop is nicely designed and very clean. With blue and white, it's made up to be a hip hangout spot. Since I went there after lunch, all I ordered was a drinking chocolate. And since it was after lunch, I went for a lighter milk chocolate versus something heavy and dark. The Cardamom Rose Milk Chocolate (with soy) was my choice.

The good-sized white mug came with two fresh marshmallows. I pinched a taste because they were so pretty, but didn't eat them because I'm one of the people who don't really like marshmallows. The chocolate was good, and I was glad that I didn't order something dark because if it's dark, I prefer a much smaller serving. The rose gave it that soft, floral feeling, while the cardamom added a touch more spice and movement to keep it all from becoming cloying. All very pleasant for an afternoon drink. 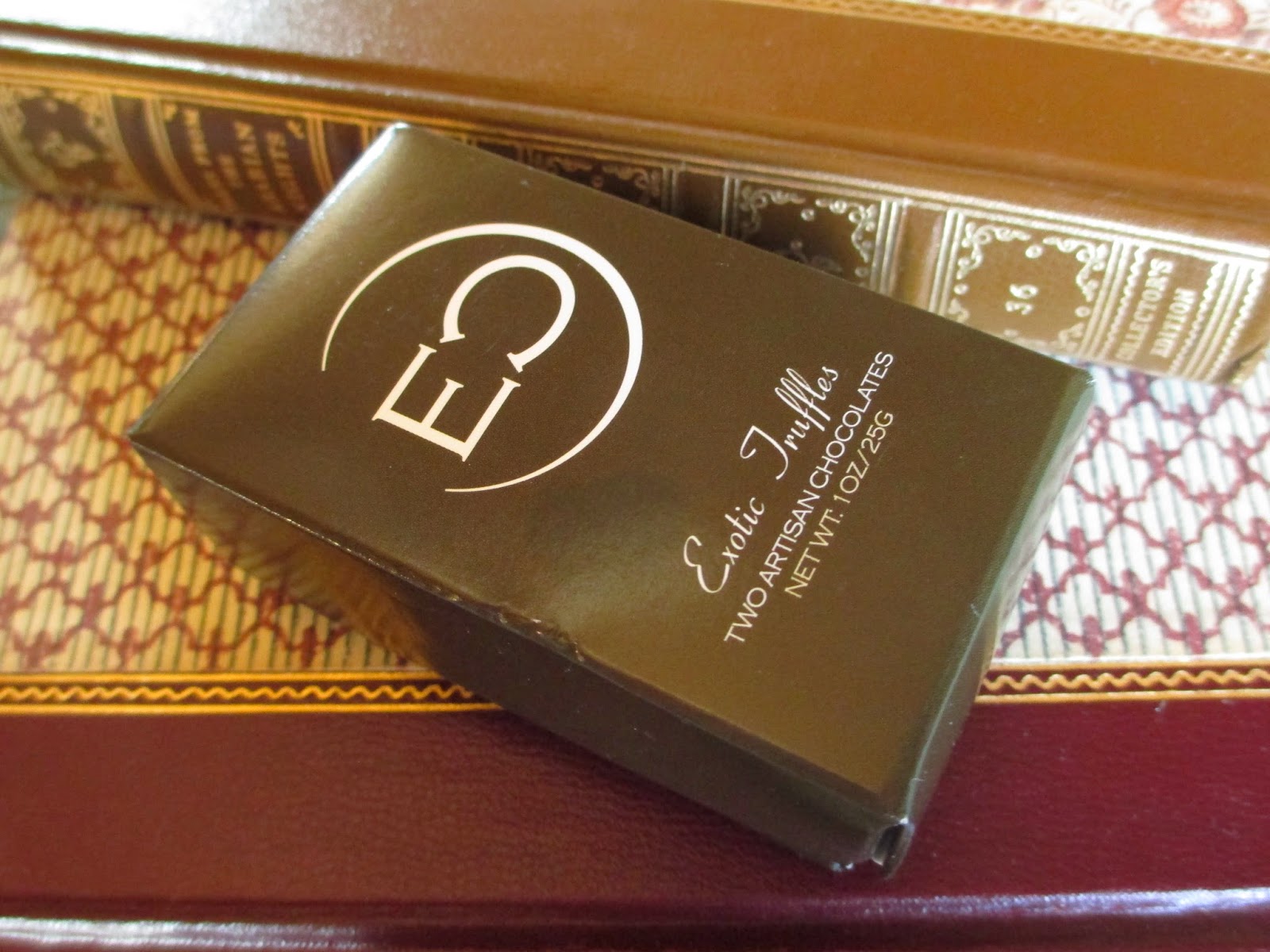 On the way out, I picked up two truffles and one chocolate bar. The bar I will save for a later post, but the truffles I will address now. The first was a champagne truffle, which I chose since it's a kind of must-have flavor. There may have been something more to the name, but I don't remember what it was. There is a dried cranberry on top, which I'm not sure I get, but the chocolate smells fragrant and the ganache looks smooth when you cut it open. 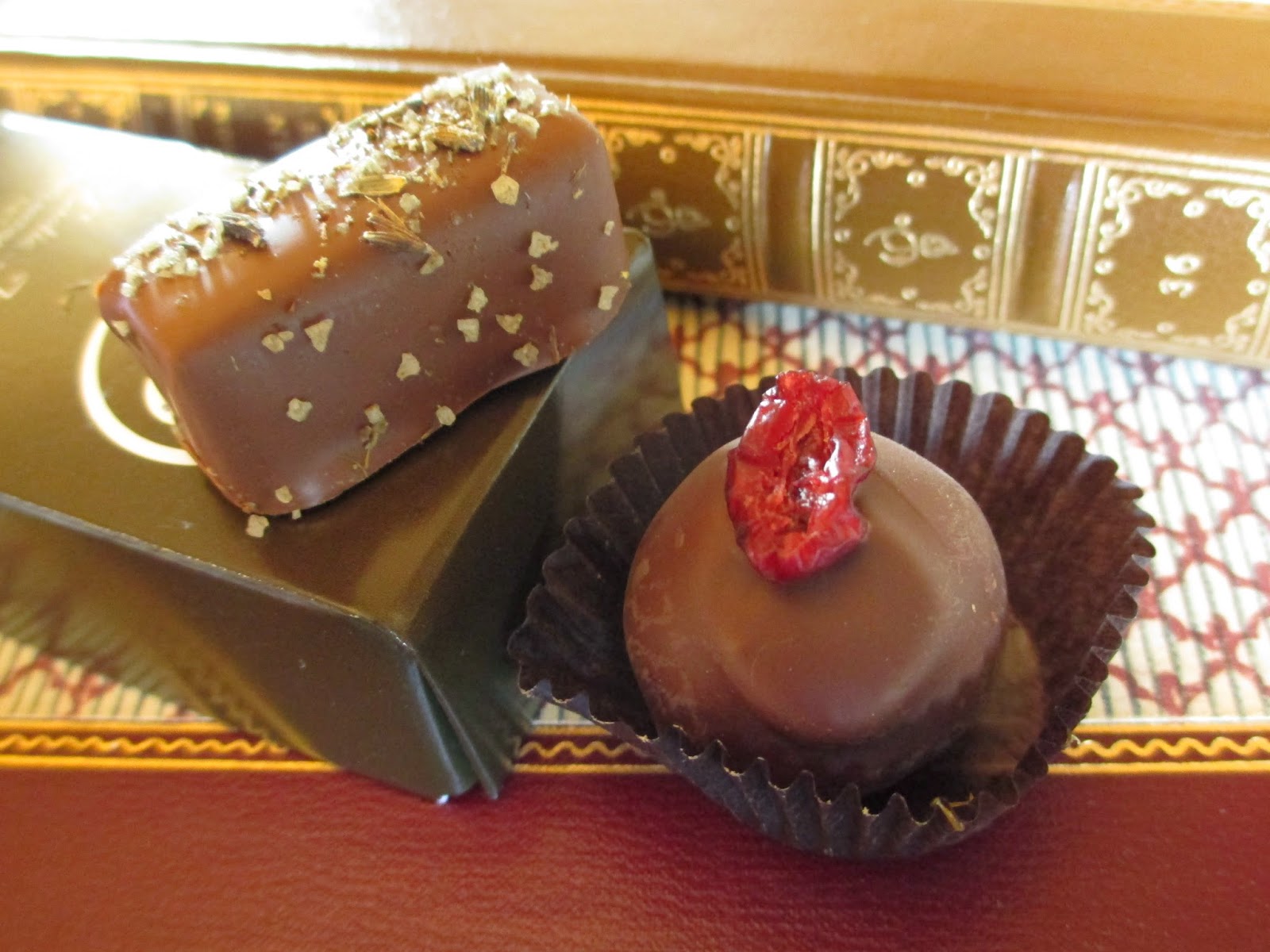 The mouthfeel is also smooth without being plasticy; the flavor is rich and light at the same time. There are rich cocoa notes, possibly a hint of salt from the other truffle, and a berry-like flavor for a splash of color. It's a nice truffle, maybe not the best I've ever had but of course a thousand times better than mass-produced chocolates. 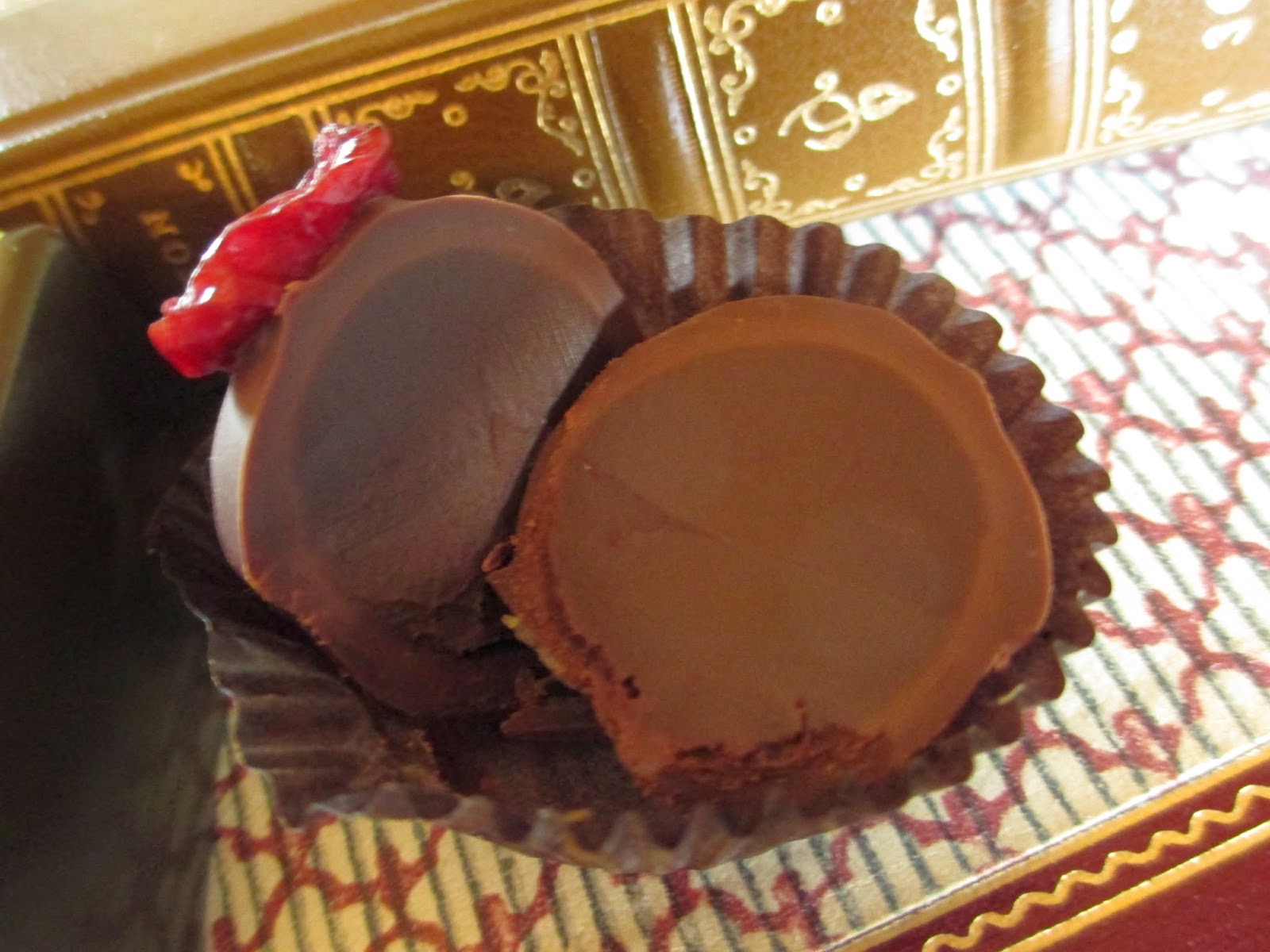 The second truffle was the Lavender Sea Salt Caramel, which is a rectangular chocolate with sprinkled salt and lavender. I think it was available in milk and dark; I didn't specify which one I wanted, so I ended up with milk, which I think goes better with the caramel, anyway. As you can see, the caramel is semi-stiff, so it doesn't flow out on its own. While the lack of messiness is nice, I would have preferred a less chewy caramel: chewiness always feels less fancy to me. It does, however, taste nicely of vanilla and sugar and whatever else caramel is composed of. 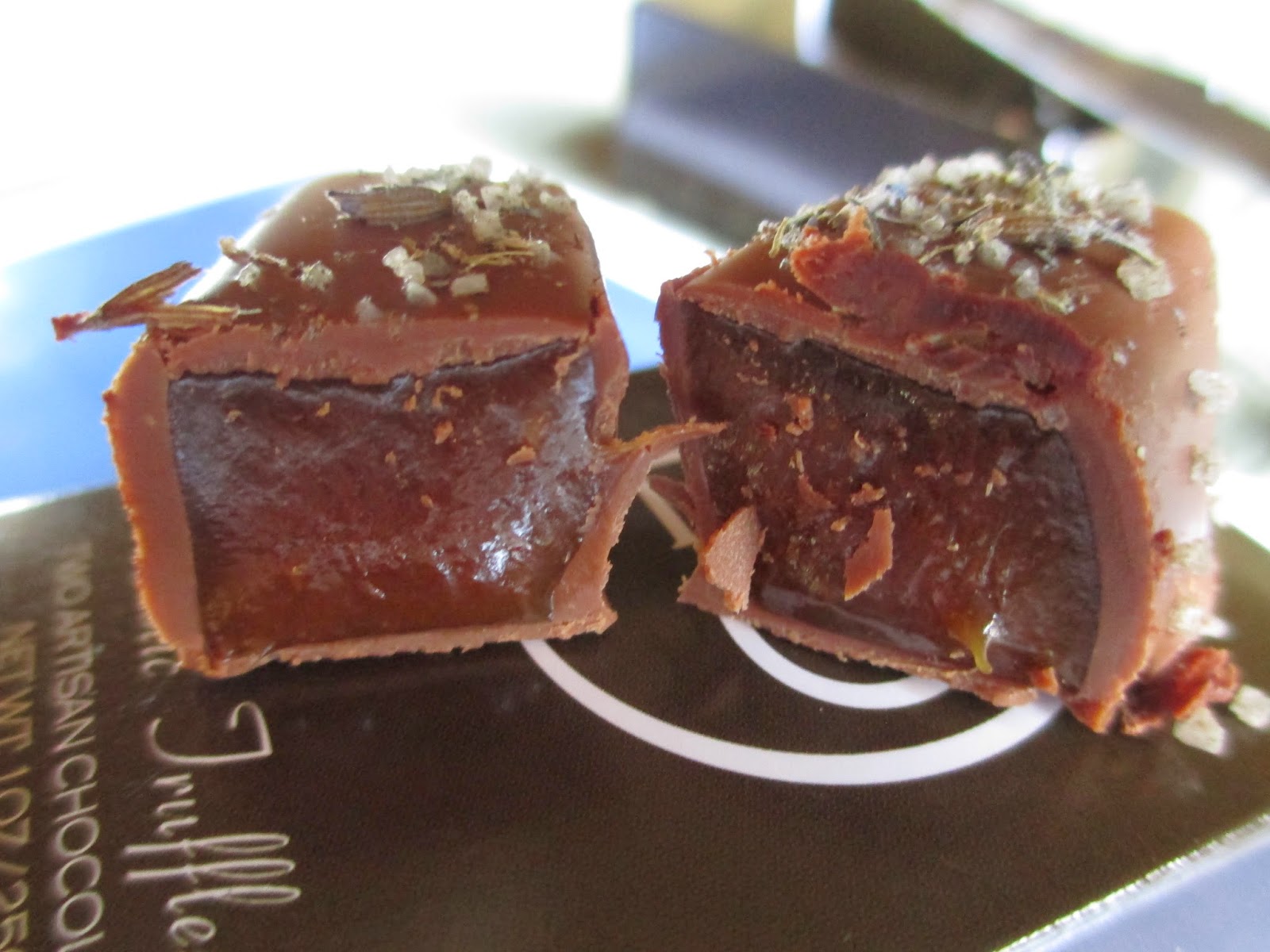 I'm starting to get tired of hearing of salted caramels because everyone does them, but the addition of lavender in this truffle makes it more unique and entertaining. Lavender does, after all, have a zing to it that is not entirely unlike the zing of salt. Now, the salt is still more prominent than the lavender (and it's delicious, flaky salt, by the way), but the lavender still adds some of its floral, citrus pop. I like this subtle addition to a popular chocolate flavor.

Now that Eclipse Chocolate has passed the taste test, I can go on to praise their other aims. They work with Guittard Chocolate (which has long been one of my favorites) for ethically-source chocolate, they use organic ingredients when they can, they don't add vegetable fats to the chocolate, they produce their chocolates in small batches (as you can already tell), and they donate a portion of profits to charities. So, yes, Eclipse Chocolate has a lot going for them, and I am a bit jealous that California has places like this and Arizona, basically, does not.
Posted by Deanna Skaggs at 10:35 AM