1) Jewelry Hangers - I wasn't exactly planning to get anything new for my jewelry, but a couple of items were starting to get cramped and these hangers from Hobby Lobby were in the perfect shade of green. I maybe have them overstuffed with necklaces and bracelets--they'd look prettier with less, perhaps, but they're more functional this way. I have mainly the beaded necklaces up because they're the ones that tend to take up more space in drawers. 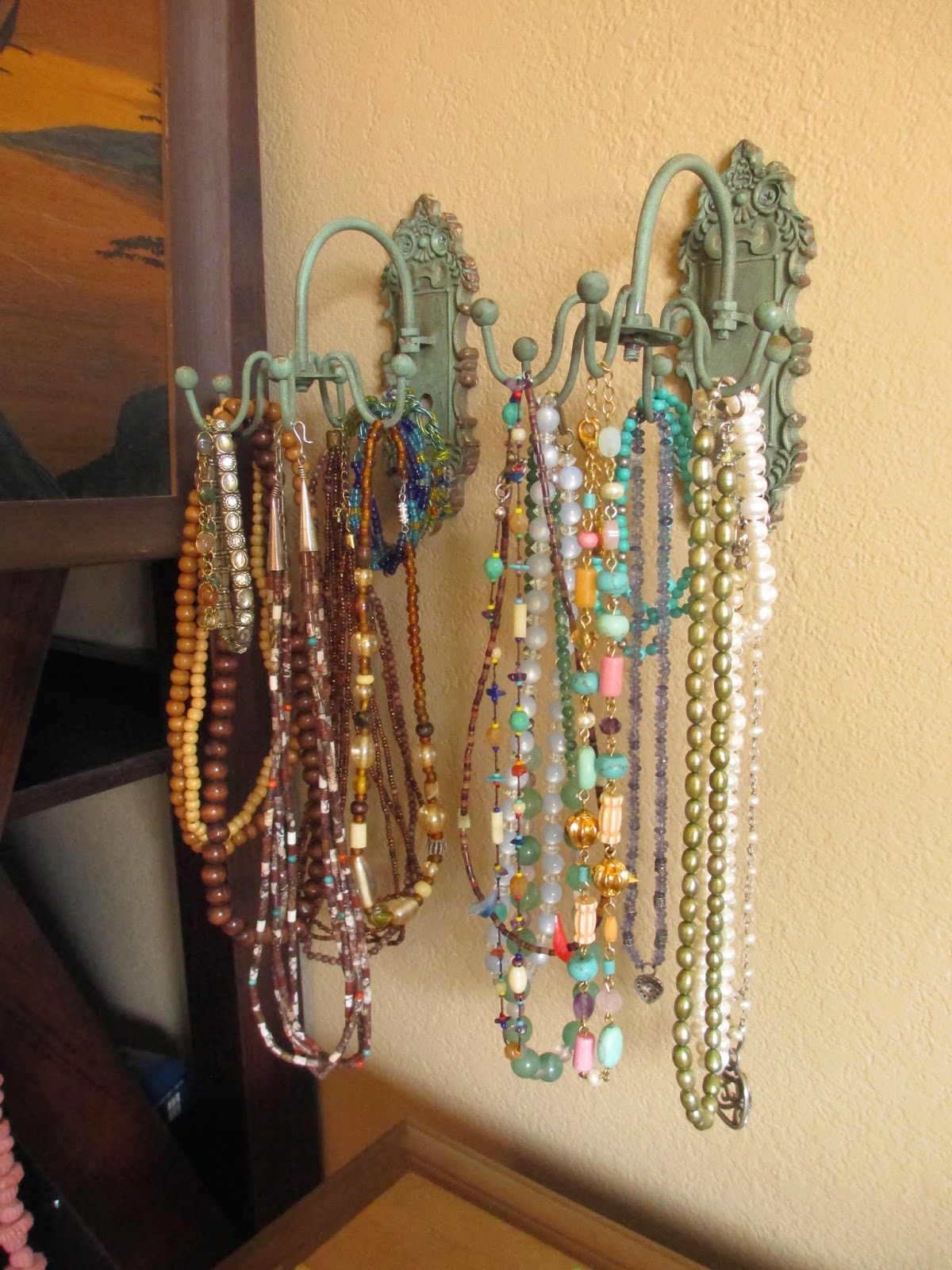 2) Downton Abbey Butler's Pantry Blend Tea - This is the fifth flavor I've had, right? It's black tea with blackberry leaves, honey, and vanilla. So it tastes like a strong black tea with an in-depth immersion of honey. 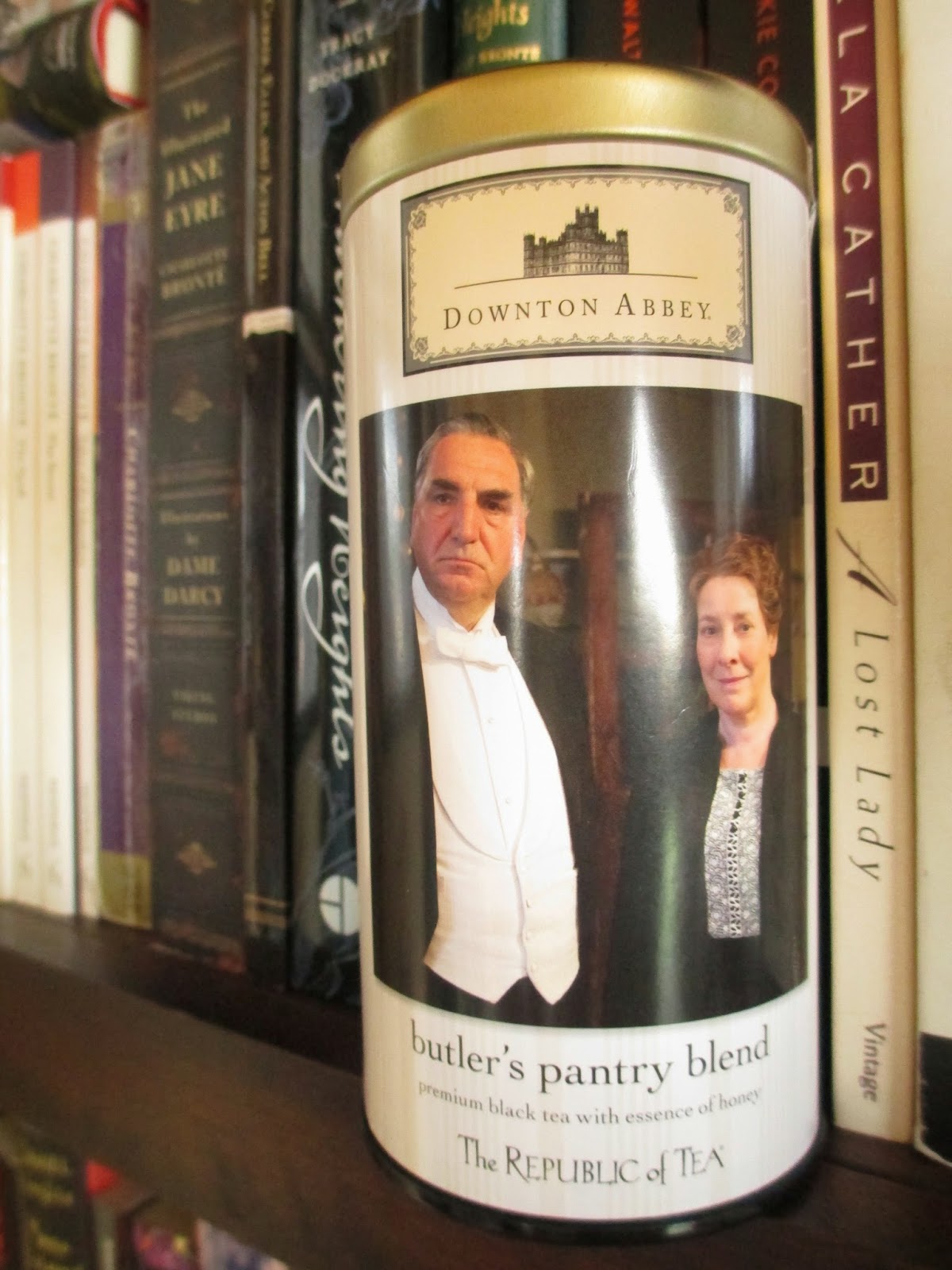 3) Wooden Necklaces - Someone recently gave me a few necklaces, among them these three with wooden beads. I really like the simplicity with the warm wood tones--I think they might be great for layering together or separately with other kinds of jewelry. They'll add a little texture and organic feel to outfits, which should be especially nice once the summer weather starts working in. 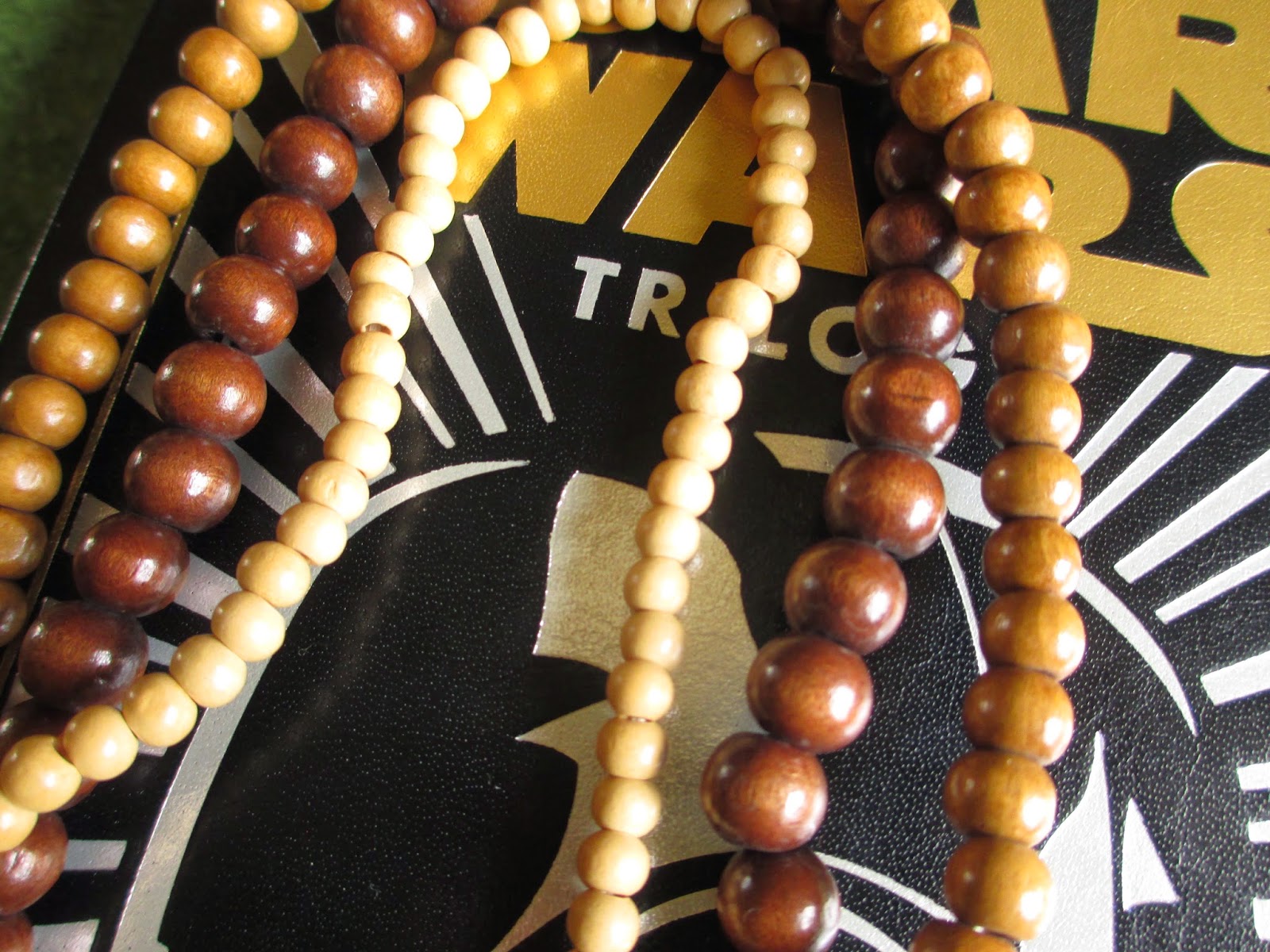 4) Double Chocolate Brownies Recipe - Click here for this recipe from Martha Stewart. It's fabulous and I highly recommend it--it's ever so much better than the other brownie recipe I tried out (which just used cocoa powder instead of also adding in the melted chocolate). It's fairly simple and because you're using chocolate, the kind of chocolate you use gives you direct power over the flavor. Do you want darker brownies with more depth, or something simpler? I've made them twice, each time with a different blend of (leftover) chocolate bars, so they tasted a little different each time. They're great: they have that harder layer on the outside and a wonderfully chewy sort of softer center. Since I don't have a picture of the brownies, here's the cocoa powder I used; it's from Equal Exchange. 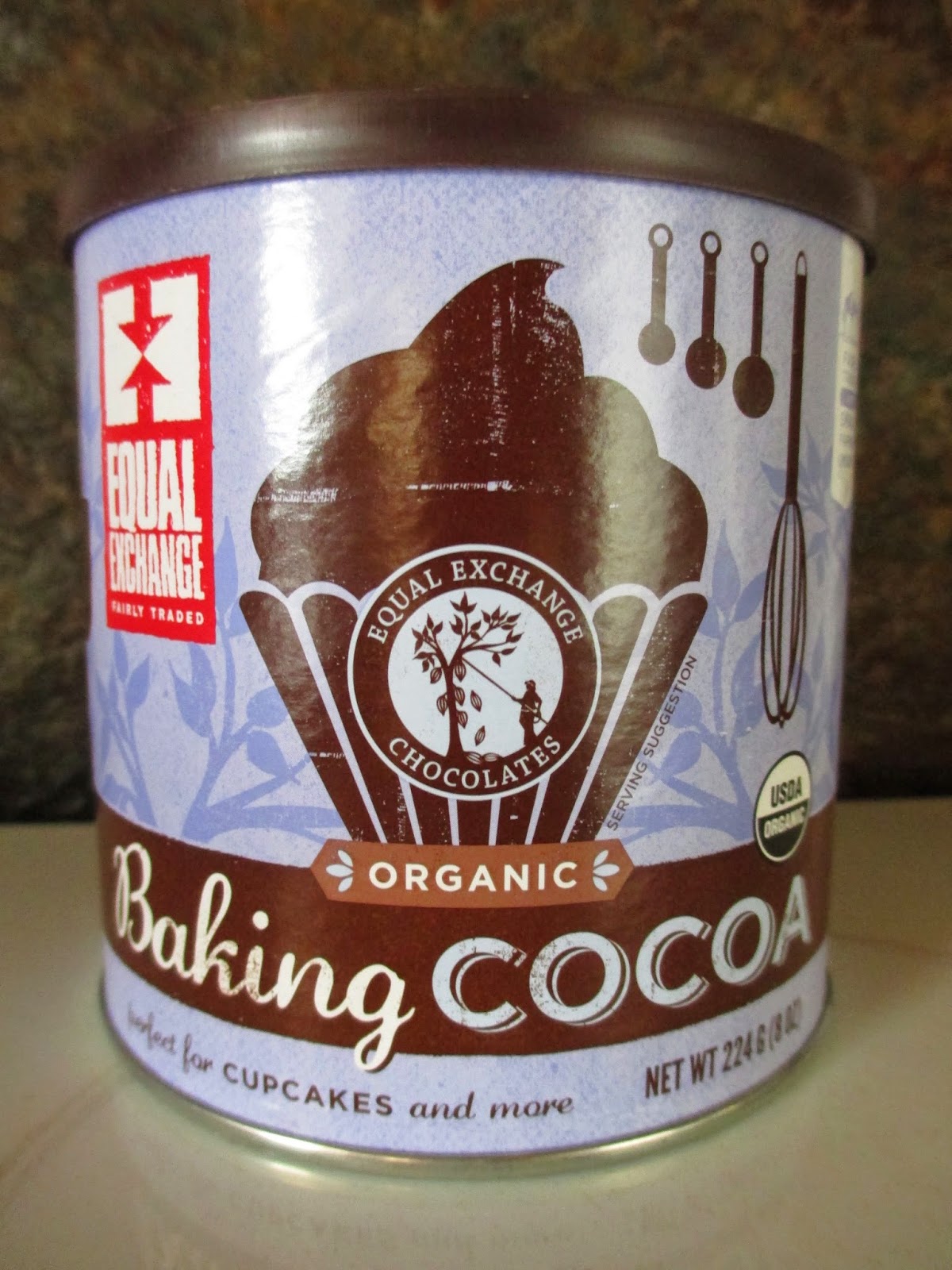 5) Pair of Cameos - More gifts. These are pins, not necklaces, although maybe I wouldn't be opposed to making them into necklaces; I don't know, I'll have to think about it. They're simple but have a pretty different look to the cameos I already have--the colors and materials are different, giving maybe a more modern look. I'm picturing them with black and white type outfits. 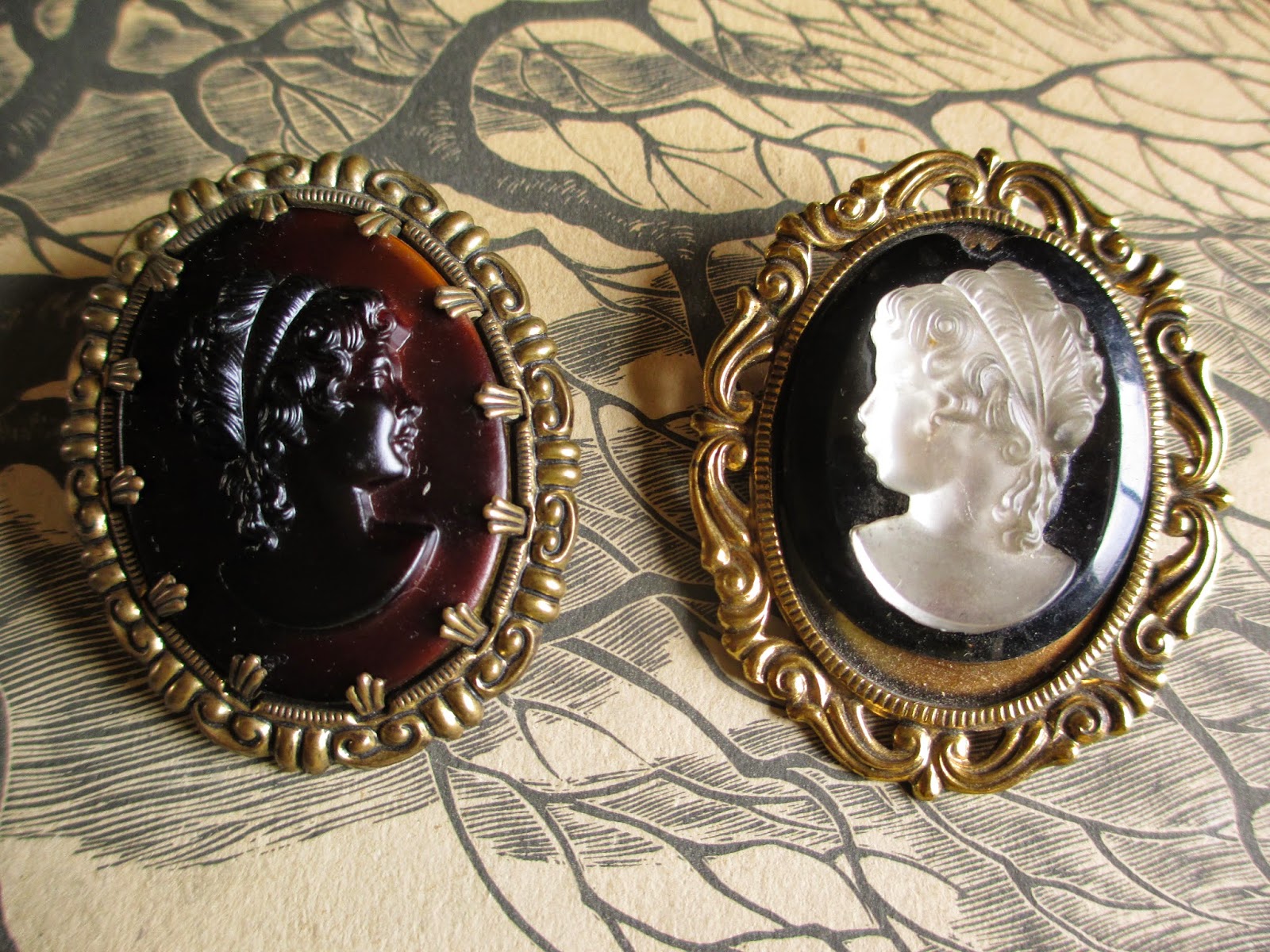 6) Wooden Pen - Okay, so it isn't that I love products with my name on them--it's just that it's literally been years since I found one with my name. Actually, I think I've only found my name in two places: a gas station in California (this must've been 15 to 18 years ago) and a tourist shop in a cute little historical town (maybe 12-15 years ago). This pen was from the Desert Botanical Garden in Phoenix. So, you know, I had to get it--and it's kind of nice that it's wood. I like wood. 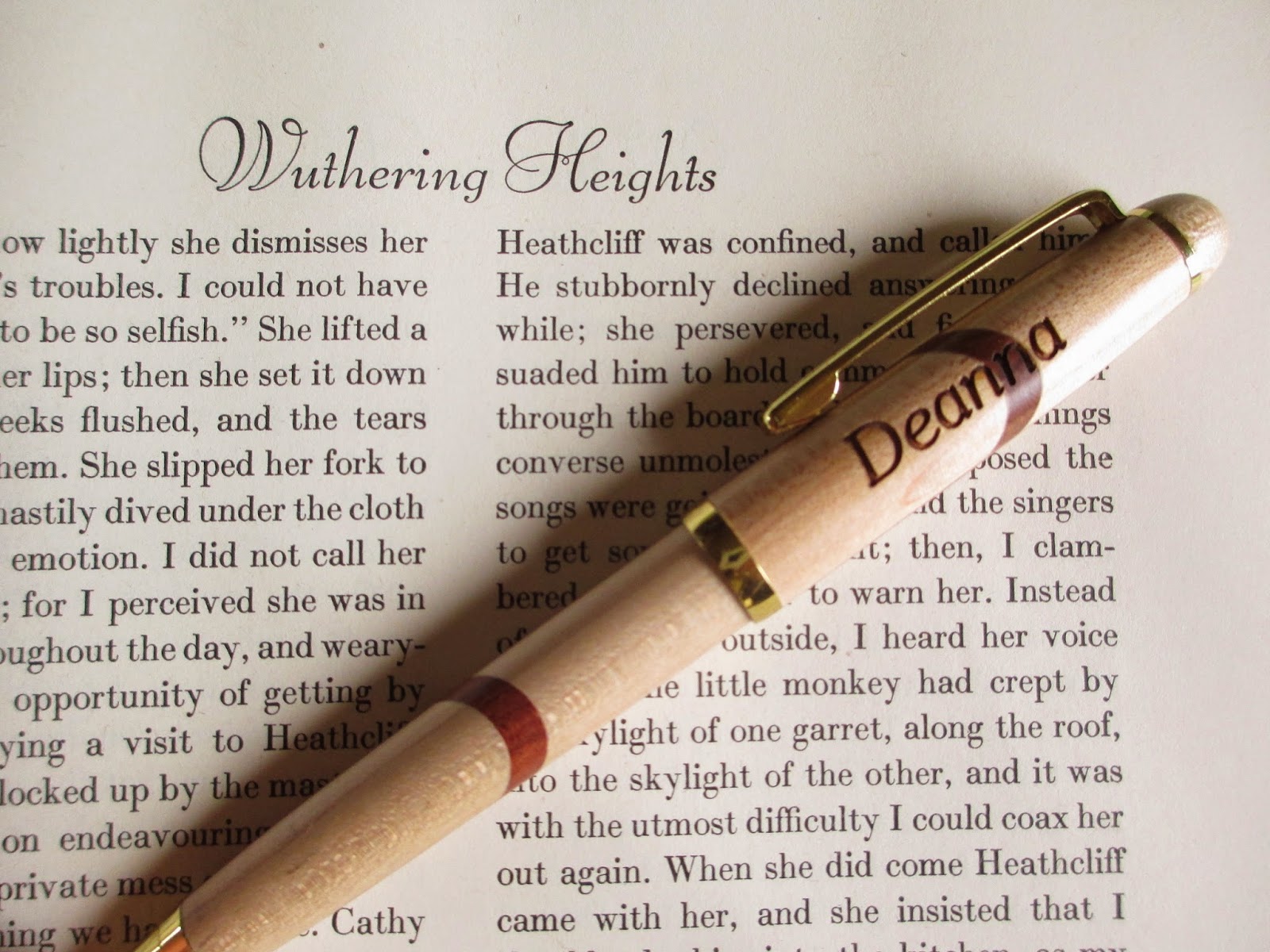 7) Green Skirt - This might be the first clothing piece I've bought from ModCloth (minus a bathing suit). I don't really buy clothing online, but I was stalking this skirt for a while. It's the Bugle Joy Skirt in Olive. I love the color and I think the skirt is really pretty and so even though I'll hardly ever have anywhere to wear it (people don't tend to wear things like this in Arizona), I couldn't resist. Though the skirt is A-line, it doesn't look as full when it's on as it does in the picture; the color is also less gray. 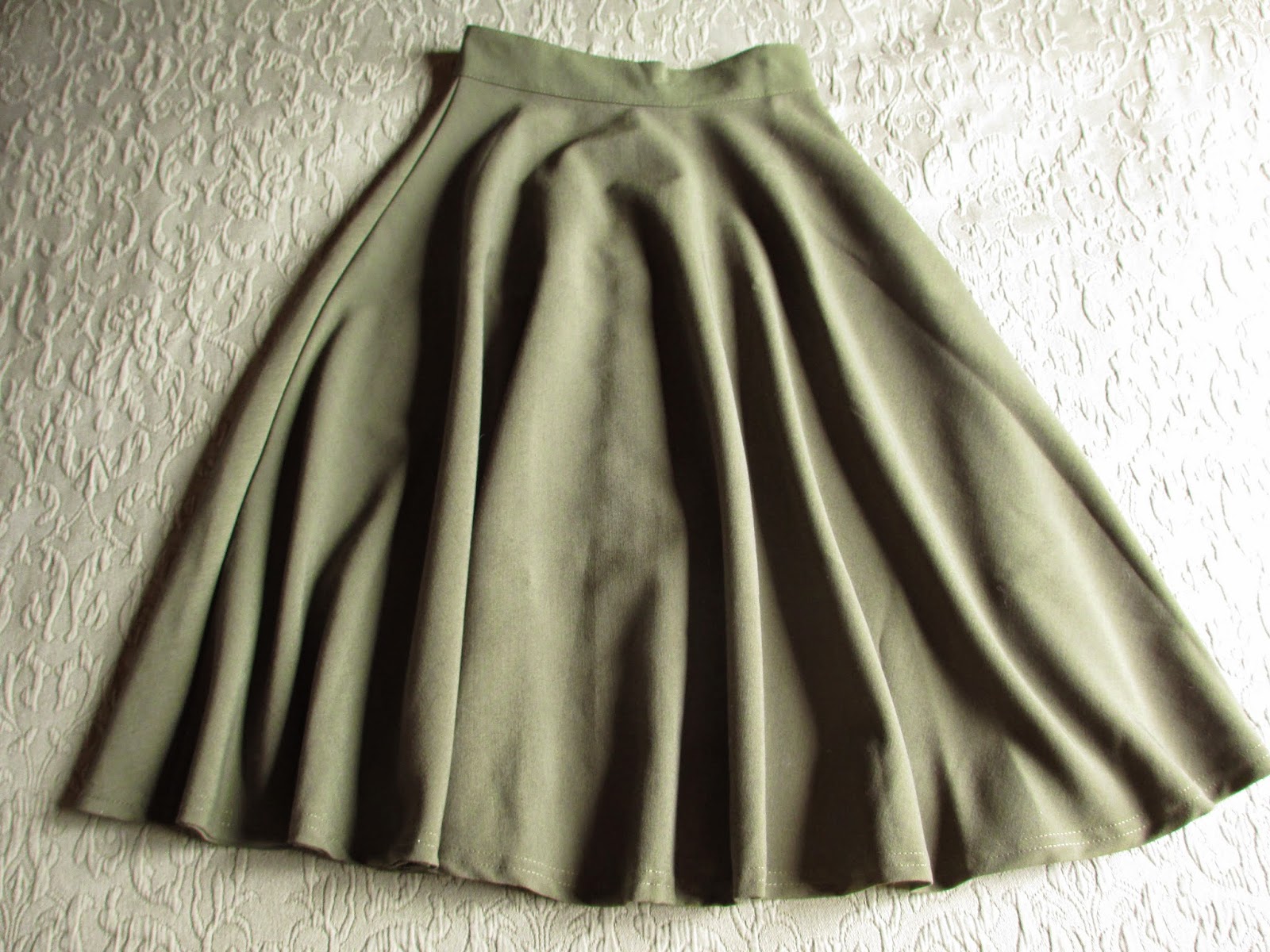 8) Oaxacan Bird - Also at the Botanical Garden, they had a collection of these Oaxacan animals. Since I had started my collection of green ones with only two, I took the opportunity to get one more--three makes for a better set. 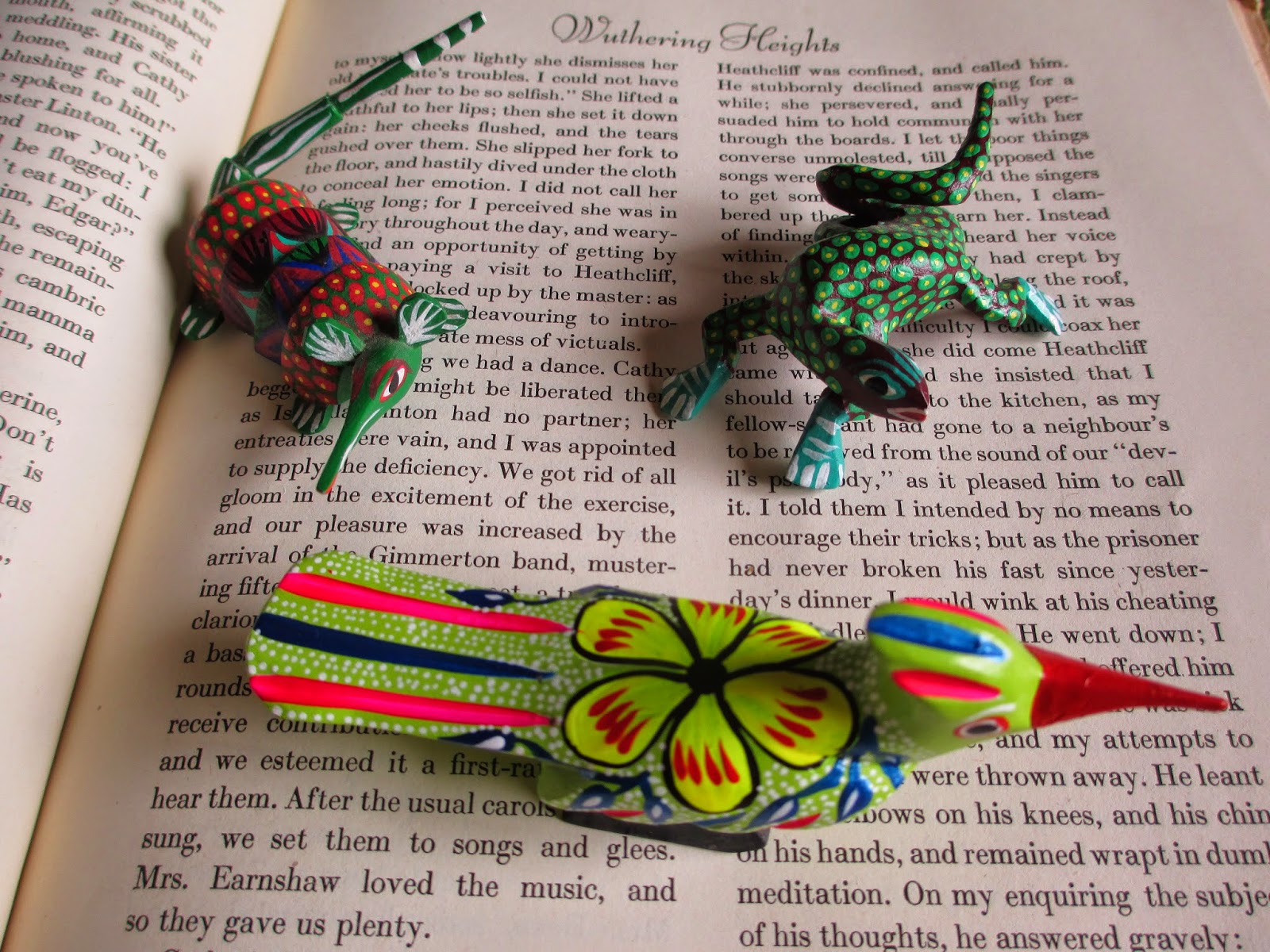 9) Soft-Boiled Eggs - Technically, perhaps, I've been making raw hard-boiled eggs. I like them best when the yolk is just barely becoming solid, though soft-boiled eggs are supposed to be more free-flowing than that. The egg cup is from Hobby Lobby. 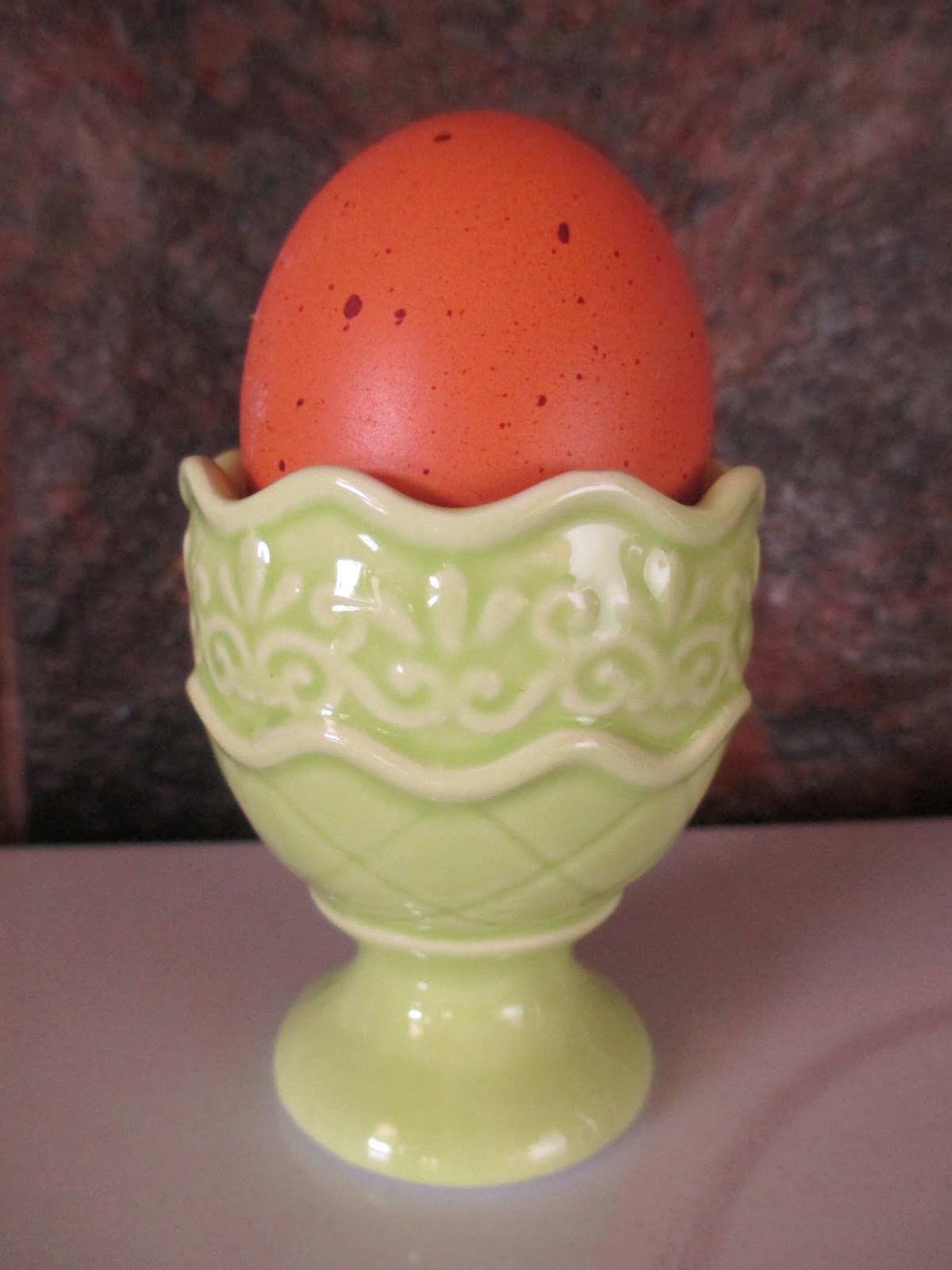 10) "Beating Heart" by Ellie Goulding - You know that I've been a little obsessed with Divergent for the past couple of weeks. When this song played in the credits, I loved how it captured the feeling of the movie. Then I kind of started to like it just on its own; I've been listening to it a lot. I'm a little out of the popular music scene: I don't really listen to the radio, so mostly I'll hear songs in random places (like stores). I'd heard Ellie Goulding's name, but wouldn't have been able to name any of her songs. Now I'm rather intrigued by her style, that atmospheric quality and her very-alive vocals. 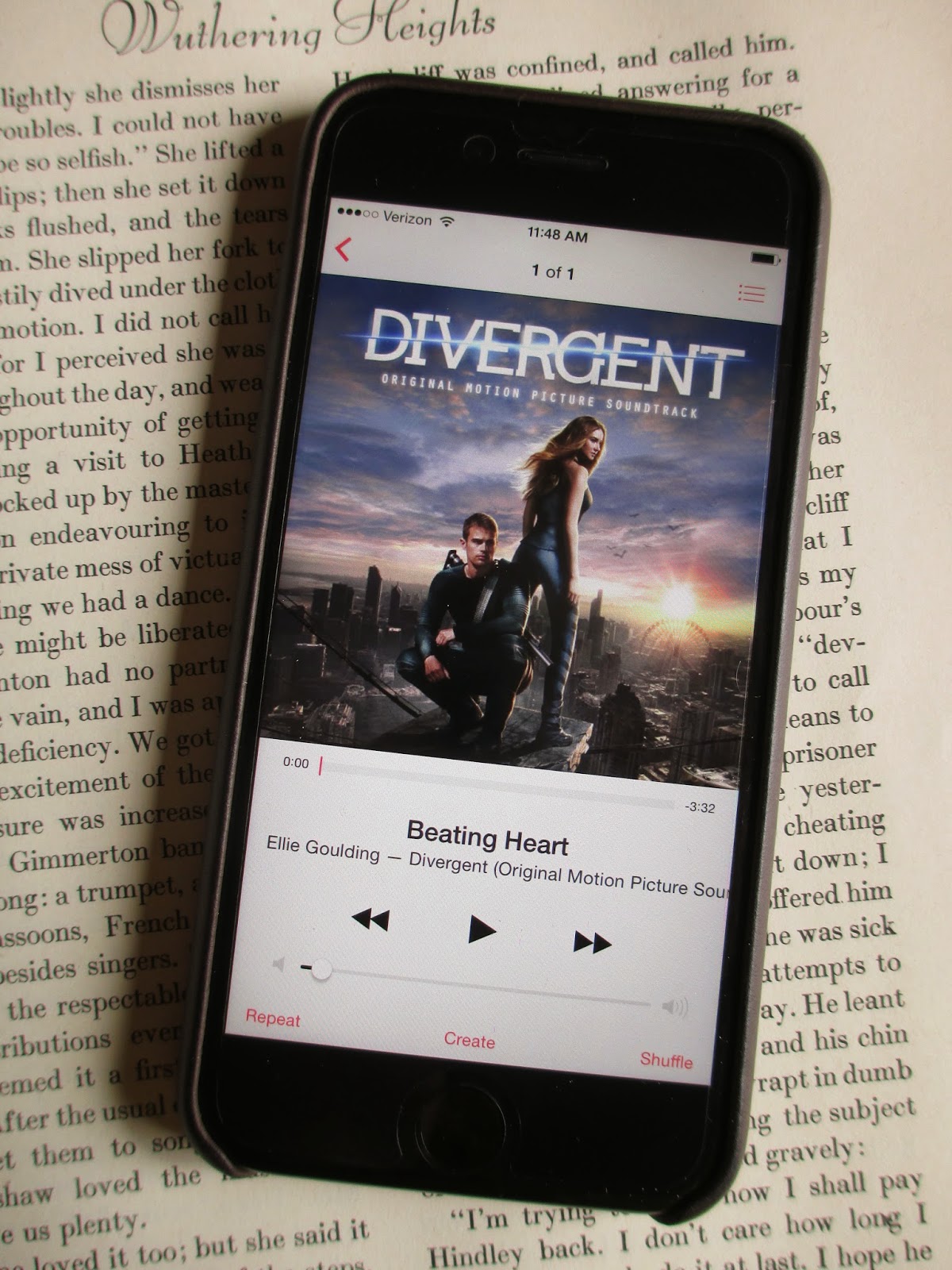