On a completely different side of the spectrum from Salazon's Gingerbread bar is my other Christmas chocolate, a set of Donut Chocolates. In fine print, the box says they're made by Chocolatissimo (the back of the box says Chocolaterie Ickx) out of Belgium. What interests me most, though, is just the cuteness. 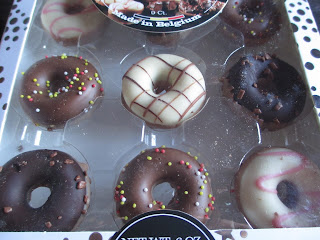 Look at them. Nine little chocolates (the total is six ounces, so that makes them just over half an ounce each) decorated like little donuts. Maybe it's because I've been really wanting to make donuts again (I just have enough people around to make it worth all the time and ingredients) that I couldn't resist the look of these. I haven't even been wanting to eat them because I've been worried that the taste wouldn't match up with the cuteness. Because even with the fun chocolate designs, the box is pretty standard without anything special about it. 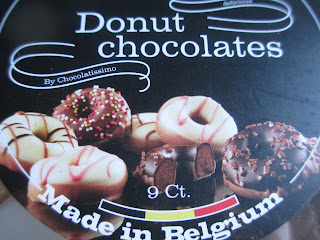 The chocolates sit on a clear tray that holds them in place but does nothing for visuals. There are three Chocolate Cremes (with the dark brown), three Caramel Cremes (with the lighter brown), two Strawberry Cremes (with the pink stripes), and one Vanilla Creme (right in the middle with the brown stripes). Kind of an odd way to arrange the flavors; it seems that there should be an even number of all the flavors, or at least more than one of each flavor in case you're sharing with someone (that's why I only like sharing my leftovers). 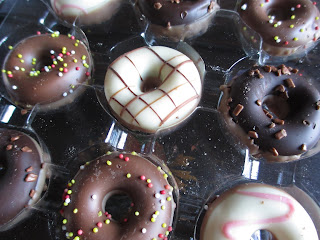 I tried a Chocolate Creme first since it seemed like the most standard flavor. And it was rather a bit better than I was expecting. I hadn't been planning on taking a picture of the insides, so I had to get a hasty picture of this one just to try and explain what the filling is like. It's kind of like what some restaurants pass off as flourless chocolate cake: a kind of rich, kind of sweet, chocolate substance that isn't quite crumbly and also just melts in a very particular way in your mouth. So you have that with a little bit of dark chocolate on top and a little bit of either colored white chocolate or very pale milk chocolate, and it all comes together to create a sweet little confection that could in fact pass for a dessert. 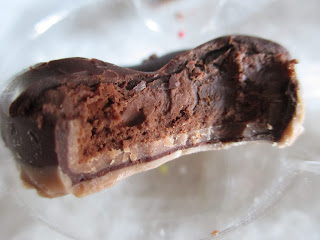 Next is the Caramel Creme, the only chocolate donut with sprinkles. It doesn't have any caramel (on its own, at least), just the flavor of caramel mixed into the chocolate. So you could also call this a maple donut since it's pretty much the same flavor. The filling here is lighter in both color and texture, though mostly similar. Everything is much sweeter here, enough that I'm almost glad for the crunch of the sprinkles to help lighten the greasiness. It's a nice candy if you like caramel and chocolate. 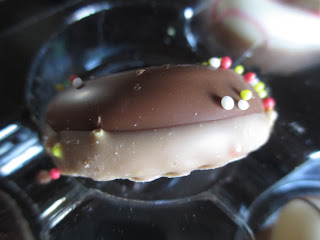 Strawberry Creme has, you guessed it, a pale pink filling that's almost slightly frothier in texture than the Chocolate Creme's filling. It has the same strawberry flavor as ice cream does, making this feel a little more like an ice cream chocolate than a donut chocolate. Having only white chocolate and that pale chocolate (which I'm guessing is just colored white chocolate rather than pale milk chocolate), this one is probably even sweeter than the Caramel Creme.

And last is the Vanilla Creme, the lone donut that cannot be shared because there is only one. A smooth, white filling has the same flavor as white cake and Vanilla Tootsie Rolls (the ones that come in the blue wrapper). So more of a candy vanilla flavor than just a straight vanilla flavor. And again, just the white chocolate and the pale chocolate, so lots of sweetness. Maybe it's a good thing there is only one of these.

You get the idea, right? It's pretty simple: cute chocolates that have to remain as candies because they're so sweet and the flavors aren't the freshest (after all, they're also packed with vegetable oils to have a shelf life of months). The Chocolate Creme was the best, followed by the Caramel Creme. So if there were less white chocolate in this box, my comments would probably be more favorable than they are. As it is, these chocolates were just fun: plain, cheap, cute fun. And I'm enjoying eating them.
Posted by Deanna Skaggs at 4:29 PM