Mostly this box of truffles is interesting as an example of how to do a moderately nice set of truffles that still have a shelf life of longer than two weeks. Obviously the fresh truffles (which only last two weeks because they're made with fresh cream) are going to be better, but not everyone always has the time (or money) or even the means (they just don't sell fresh truffles where I live) to buy such truffles. So sometimes you want truffles with a long shelf life. Trader Joe's sometimes sells some cocoa-dusted truffles that I used to think were good--but that I now find less interesting. These are better. 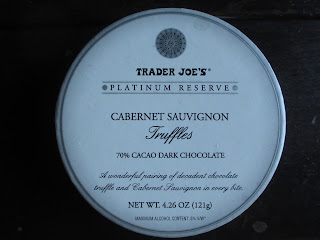 They started selling them last year with the Christmas items (I know I said I was done with Christmas items, but I wasn't sure if I was going to do a review of these or not--and they're not really Christmas-y, anyway, right?) and the best by date is at the end of March. So at least a few months of a shelf life. Instead of cream, the ganache is made with caramel, corn syrup, and butter (no partially hydrogenated oils). And then there is the cabernet sauvignon (the maximum alcohol content is 0.5%). When you first open the box, the truffles do taste a little boozy. But if you let them get closer to that best by date, the alcohol taste seems to fade away somewhat. It seems that it was never intended to be strong, anyway: it's mostly there to elevate the taste of the chocolate, to make it seem richer and more complex.

And it works. The chocolate here is an average 70% cocoa content. A little dusty in flavor, definitely not too sweet and leaning a little more toward the bitter side (though also not really bitter, especially when tasted in such close proximity to the ganache). The chocolate shell is also about average thickness, neither too thin nor too thick. The ganache is smooth and cool, tending toward a silky texture (probably because of the caramel). 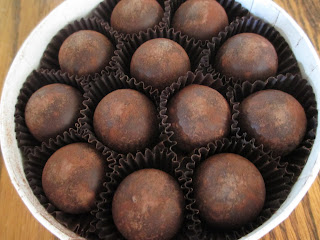 Oh, yes, and I've almost forgotten about the box (have I just been completely ignoring packaging lately? I used to talk more about packaging than the product inside). A thin, flat circle edged in silver calls to mind gourmet, bulk foods. Wrapped cheese and meat, for instance--especially what you might choose to pair with wine. Given the generally casual nature of Trader Joe's packaging (even when it comes to their Christmas cookies and confections, which are often put together to be gift-giving-friendly), this box is quite classy-looking. Very simple but with just the right touches--maybe that's why I thought these truffles would be worth trying (well, that and the fact that there's no partially hydrogenated oil)? 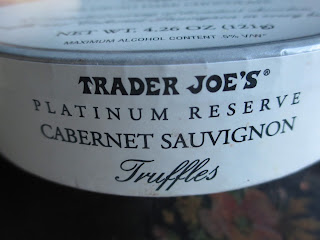 And you know what's also great? The lid just lifts right off and slides right back on, so you can keep using it to store the truffles for as little or as long time as you need. This may seem like a small thing, but I hate when an opened package can't be used again if you don't finish everything in one day. And these truffles are well enough made that just one or two is satisfying; they float just above the level of confections (which often have to be eaten by the handful).

So for those of us living away from fresh truffles . . . Trader Joe's is a good friend.
Posted by Deanna Skaggs at 5:43 PM