On the Changing Temperatures

The air was so cold there for a while in the first half of January. Insulated shirts plus cashmere sweaters plus jackets and hoods and scarves and gloves and wool socks were all necessary items. It truly was winter.

And then came this past week, when the sun seemed so much stronger and the sky was often clear and the temperatures rose up to the high sixties in the afternoon and only dropped to about thirty at night. It's been energizing. I've spent some time doing some work outside. Inside, I've been encouraged to do more or to go about things more enthusiastically because it isn't as dark and as cold. And the sun is finally staying out a little later in the evenings. Almost it has seemed that spring is here. 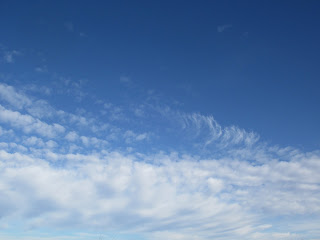 Until we realize and remember that it was only a warm spell. February, generally the coldest month around here, is yet to come. Late March is the beginning of spring--and that is a ways still away. Today (Friday) the high is seventy, the low thirty-six. But on Monday the high is forty-six and the low eighteen, with a chance of snow. So one day you can be out in short sleeves and just a couple of days later you have to be all bundled up to step outside. Or maybe I should rephrase: at one time of the day (early afternoon) you can be outside in short sleeves and at another time of day (early morning especially but also at night) you have to be all bundled up to step outside. This is why I check the weather app on my phone at least twice a day, often looking also at the hourly temperatures: it makes such a difference toward what you need to wear.

The weather is bipolar out here. (I realize that other parts of the country also have cold fronts and warm spells around the same time--I'm talking more about the regular, drastic changes between cold and warm.) Up and down and back and forth. Sunny and cloudy. Dry and rainy. Warm and freezing. Not only do we experience all four seasons throughout the year, but sometimes we seem to get all four within a week or even a day.

It certainly affects your mood, too. Halfway between melancholy and joy. Bright again just when the winter was starting to wear you down. Rested again just when the warmth was getting to be too much. Never complacent, always moving, always changing, always rotating. That is the weather here, and I can't imagine it any other way.
Posted by Deanna Skaggs at 3:47 PM