The Novelization & the Second Viewing

Yes, there will be spoilers of The Force Awakens.

We're all just taking Episode VII into our skin now, aren't we? Back when they started releasing all the march before the movie last year, everything looked so foreign and unknown and now it's all becoming familiar and part of the whole picture. Now Episode VII is moving away from being "the new movie" to simply being the seventh installment (wow, are we really on seven already?). 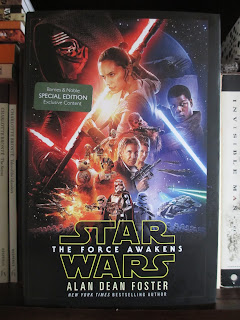 I guess we'll start with Alan Dean Foster's novelization. (Side note: his author bio paragraph says he lives in Prescott, Arizona--really? He lives just right there? I've probably walked by him at some point; that's so cool that someone just right there wrote this book.) The tone of the narration is just right: something about it (like the movie, I guess) hits right in between the narrative styles for the original trilogy's novelizations and those of the prequel trilogy. It's more updated than those older books but it also has something of that (I almost want to call it more "sci-fi" style, though that isn't quite what I mean) style. Neutral, straightforward, good use of descriptions (not overdone but always used with weight and meaning when it's called for). And a look into different characters' heads.

It was strange reading the novelization after I'd only seen the movie once. It was a way of reliving the movie--but it was also odd because I hadn't had a chance to memorize lines and conversations and scenes yet. So it wasn't until I saw the movie again that I really realized where certain conversations are extended in the book and which pieces are added in/developed in more detail. There was less extending in here than with the prequel trilogy's novelizations: here, it was more about making conversations a few lines longer than about adding in whole new scenes. So I would say it's more about relieving the movie than adding much to it (which is perfectly fine). It was great fun to read and go over favorite scenes with a little more leisure. I got the Barnes & Noble copy, which has a couple of color inserts that include pictures from the movie--it's very much in the look of the 1976 edition of Star Wars that they released before that movie came out (Can you believe that I actually have that edition? Antique stores are so wonderful; I just happened on the book sitting randomly underneath a cookbook, where I wouldn't have seen it if I hadn't been making it a point to check spines.)

And now the second viewing of the movie. I watched it in 2D this time because I wanted to see it in the Cine Capri theatre at Harkins (which is a much bigger screen, though not as big as IMAX [which I find too big], and also includes Dolby Atmos sound). I'd forgotten how great the Cine Capri is; it really is the best way to watch a 2D movie.

I still found the title sequence so beautiful. And this time it's like I was watching in a completely new way in regards to character: I knew a little bit about who everyone was this time, so I could easier see what's going on in every scene. Kylo Ren just keeps getting better and better the more you think about his character: there is something so soft and warm about him that just makes him even more terrifying when you realize that, despite this, he wants to be dark. And Adam Driver plays him so well: there is so much depth to the way he plays every subtle thing that I know there is so much more that we're going to get from this character.

And the way that he relates to Rey. In such a specific way. For a brief moment, I even wondered if it was possible if she was his daughter. I know, the actors are only about ten years apart in age, but if Padme was supposed to be 14 (Natalie Portman certainly wasn't 14) in The Phantom Menace, then maybe Rey was 16 (they do keep referring to her as "the girl") and Ren was 34? But no, the novelization says that Rey isn't quite twenty. So that rules out that theory. But I'm just starting to think that my initial thought that Rey is Luke's daughter might not be quite it: it seems too obvious. And she can't be Han and Leia's (Leia makes such a big deal of wanting Ren back that I don't think she would act so neutral about Rey if Rey were her own daughter).

That made me wonder if she isn't related to Kylo Ren at all--in which case maybe she might develop into his love interest later on in the movies, which would enable her to be the one to turn him away from the dark side. (Is it weird that I just went from her being his daughter to his love interest? Sorry.) I feel like there is a certain something about the way that he relates to her that could support this possibility--but it just doesn't quite feel right, either, does it? I have a feeling that the answer might be something that none of us are expecting, a theory no one has said yet--in which case we'll just have to wait.

So I'll go back to thinking of them as cousins for now, flip sides of a coin. I mean, don't you love that picture that's on the book cover, with them right next to each other, his lightsaber right up against her staff? Whatever the connection between them, I love the constant comparing and linking of them. It's very Star Wars, the ideas about light and dark and balance and whatnot. And when he tells her that she needs a teacher, I think there is more to that line, something more that we don't know yet. It is easy to find evidence for that theory that Kylo Ren is only pretending to take part in the dark side just to defeat the First Order from the inside (very easy, almost too easy--even if the theory isn't the case, I think this shows just how complicated his situation is). You could take it as he's pleading with her to fight back enough that he can't defeat her--even though he also seems so taken aback every time she shows how powerful she is/can be.

The first time I saw the movie, I was content simply to say that it was good: I didn't need to determine how good it was. But now that I've seen it again, I realize that it was in fact good. This movie, like those that came before, will last generations. It's kept to the same things that we recognize and love while also introducing a new take on everything for the next chapter in the story. Everything is becoming familiar and lovable, from the big things like the friendship between Rey and Finn to the little things like that fantastic bird on Jakku that eats metal that you see in only one quick shot.

I've been thinking about a couple of other things, too. Star Wars has never really had flashbacks. But Episode VII keeps referring to things that have happened in such a way that I wonder if we'll have flashbacks in the next movie. How will we learn what happened to Luke, to Ren, and to Rey? Will we see some of it happen in flashbacks, or just have it all explained to us? It feels like the answers are too complicated for quick explanations. But I've been coming up with some possibilities.

You know how Ren goes into people's minds to take information? Well, maybe Rey had memories erased or blocked from her mind in a similar way. I'm guessing that Rey is Luke's daughter, so after Ren went bad, Luke was worried that he would fail Rey in the same way. So to protect her from himself, he sent her away/stayed away from her and to protect her from Ren, he blocked her memories. That would explain why, when she comes to him on the island, he has such a sad look on his face (which I didn't even notice the first time). But whatever happened before, presumably he's going to train her now--and what advice will he give? What advice can he give?

As the last sentence in the novelization, what will happen next? I can't wait to find out but I'm also going to try and savor the wondering for the next two years (after all, when I was young I got to watch the whole original trilogy in a row without having to wait years in between each one--the prequel trilogy is different because you always knew how it was all going to end, in general if not in detail).

Posted by Deanna Skaggs at 8:03 PM