I never seem to get Christmas chocolates all reviewed before Christmas is over. The problem is, I often don't even get them until Christmas day, and then I have to wait until I have a chance to sit down and take pictures and write up the review. So. Here is a holiday chocolate bar from Salazon Chocolate; after all, gingerbread shouldn't be so out of place in January, anyway. It's still cold out (and so cloudy all week, too). 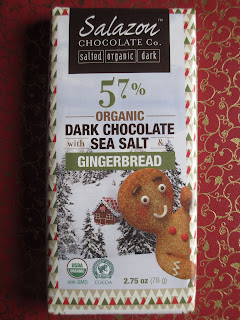 I was positive that I had tried something from Salazon Chocolate before, but after glancing through their website's product list, nothing looks familiar. Maybe I've just seen their chocolate around. The flavor of this bar, gingerbread, is exciting, though the packaging puts up an ambiguous first impression. At first, it looks great: a basic chocolate bar style but with a dash of holiday imagery. Then I start to wonder if it looks cluttered, both visually and in terms of the content: lots of words in the brown box on top, lots of words in the main label in the middle, and all the little logos at the bottom--and how can sea salt and gingerbread go together? And as readers will know, I'm not usually fond of chocolate in the 50% range; usually I find it too boring, too dark to be pleasant but also not complex enough in flavor to be interesting. So after my initial interest in the gingerbread flavor, I hesitated. 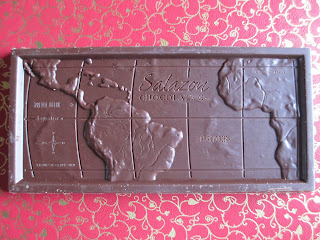 And then I unwrapped the paper and the gold foil and out emerged this beautiful bar of chocolate. It's gorgeous. Given that the imagery has nothing to do with gingerbread, I expect that this is Salazon's usual chocolate mold, and it's one of the best I've seen. A map of Central America, the top of South America, and the eastern coastline of Africa, complete with little markers of the Equator, the Tropics of Cancer/Capricorn, and the oceans. Salazon's name is right there in the middle. The level of detail in this map is surprising, as is its smoothness: I had to look pretty hard to find the six or so tiny little air bubbles. 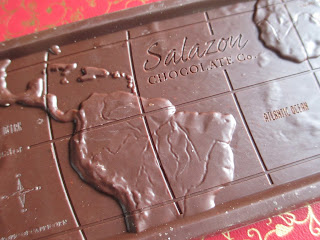 The back of the bar is, of course, plain. On its surface you can see the sea salt, much less than I was picturing there would be. My picture of a corner of the chocolate shows one of the more heavily sprinkled areas, so you can see that there was no over-salting going on, which very much eased my worries about strange flavor combinations. Now, Salazon claims to be the first salted chocolate company, explaining that they are very careful about the salt/chocolate ratio, using the salt to balance out the flavors (specifically of sweet/bitter) just as salt has been used for generations to season other foods. Given that they started around 2009 or 2010, perhaps they're right: I remember salt becoming all the rage in chocolate a little bit after that. It started with salted caramel, then moved into chocolate. Either way, I can agree (from this bar) that Salazon speaks truthfully about controlling the exact amount of salt: this bar is definitely not over-salted (as some chocolate I've had). 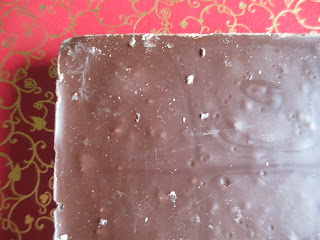 It smells and tastes of gingerbread, not salt. Very warm, spicy, and rich gingerbread. It almost tastes like there is a dash of cayenne or something like that; the ingredients list does show black pepper and allspice, so perhaps they're what I was tasting. So definitely on the spicier and less sweet side of the gingerbread range. It has all the tanginess of ginger, but not too much of the specific sharpness. You can taste the salt just a bit when it hits your tongue (since it's on the bottom of the chocolate), but it fades away into the other flavors--or perhaps they all fade into one. I don't know; it works.

The chocolate works, too. The packaging labels this as organic, non-GMO, and Rainforest Alliance Certified sun-dried Hispaniola cacao grown in the Dominican Republic (Salazon makes their chocolate in Maryland--their company's name is the Spanish word for "salted"). Their website further states that their chocolate is fair trade, though I do wonder why they wouldn't label a bar as such: I think the holiday bars must be an exception (which is a little odd because they seem to imply that they use a single kind of cocoa for all their bars). But organic and Rainforest Alliance for all their chocolates and fair trade for the non-holiday bars is still a good thing.

Back to flavor. Though I wasn't very keen on the idea of a 57% cocoa bar, the level of this chocolate's flavors works well in this context. It tastes more like a dark milk chocolate than just a dark chocolate, which I in fact prefer to a boring dark chocolate. There is some sweetness to the chocolate, but it all gets balanced out by the spices, and there's only a touch of darkness that serves to complement the richness of the flavors. And the inclusion of tiny pieces of ginger snaps encourages chewing the chocolate rather than letting it melt: in this case, I find that that's the better way of tasting all the different flavors together. I'm always so much into eating chocolate tiny piece by tiny piece that it really says something that I've already finished a third of this 78 gram bar and I'm still ready to keep eating it.

Did you see that? I pretty much only have positive things to say about this chocolate. That's impressive to pull off all of these flavors so well, along with having such a beautiful-looking bar and some important ethics, too. I'll have to keep my eye out for more of Salazon's products.