Okay, this review will be quick because, frankly, there isn't much to say.

Being that this is the Southwest, beans are one of the staple foods: they're healthy and easy to make and they go with pretty much everything and they come in so many varieties, too. So the idea of chocolate beans looked funny and cute and so of course I just had to try them. The look here, though, is different from the Southwest: they're Magic Beans. Magic beans go with a world of fantasy, with giants who live up in the clouds and that sort of thing. 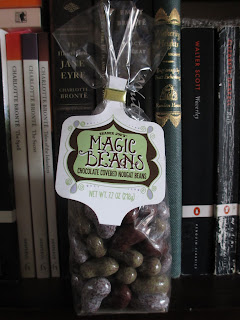 So while the colors are fairly toward the natural tones, they also have a touch of whimsy. Green and a sort of white-purple, with only a few brown--and all speckled. Visually, they're pretty, though of course the packaging is quite simple, as is usual with Trader Joe's products (hey, it's how they keep the prices down). The surface of the candies is pretty shiny with all that coating, but I guess that's the norm, isn't it? 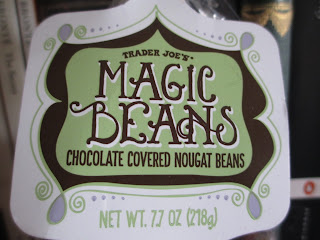 Now, the label says that they're "chocolate covered nougat beans." The nougat sounded a little odd to me, but I wanted to try them and I do, after all, like nougat, so the idea was appealing to me more and more the more I thought about it. And then I got my knife out to cut one of the beans open to show the inside in a picture, and instead of finding a nice soft nougat my knife had a tough time getting into a rather hard interior. As it turns out, the inside is what I would call toffee, not nougat. Hard, honey-colored candy that kind of sticks in your teeth. 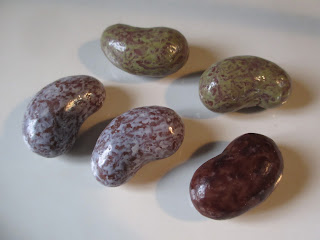 I like toffee, but the label says nougat and I've always known nougat to be soft and toffee to be crunchy--I think that's the general way, even if technically (after I looked it up, that is) nougat can also be crunchy. So I do have to mark down some points for the mislabeling: you want to go with the names that people are generally used to. Or at least call it "crunchy almond nougat" or something like that. 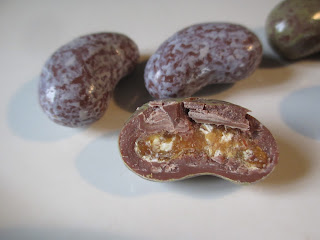 Labeling aside, they're pleasant candies. The milk chocolate coating is fairly flat in flavor: it's just a sweet something to hold in the nougat. The nougat has small slivers of almond that probably add to the crunch (though the candy section is crunchy enough on its own that the crunches are indistinguishable) and add just a touch of nutty flavor. Nothing is particularly special, though they are good and better than a lot of standard grocery store candies (Trader Joe's does tend to have better sweets). I wouldn't probably specifically set out to buy them--but I also wouldn't mind having more if more somehow ended up in my hands.
Posted by Deanna Skaggs at 6:18 PM