The Awakening of the Art

I used to like when, at the end of an episode of Wishbone, they would show a clip of how they had made the sets or something like that. And my interest in watching behind-the-scenes as a child translated into an interest in movie books as I got older. What started as just a couple of movie companions has now grown into quite a pile, one that's also more diversified and detailed than just movie companions. So while I wait for the movie companion for The Force Awakens to come out, I've settled in with the art book by Phil Szostak.

As far as movie art books go, I guess what I've mostly read are the ones Weta put together for The Hobbit (I have the last one sitting waiting to be read, by the way--I do promise I'll get to it before too long). This one is very different from those. Those are more about pencilled and painted sketches or illustrations, with many small images of anything from sets to props to small clothing items or accessories. And it had lots and lots of captions and quotes. 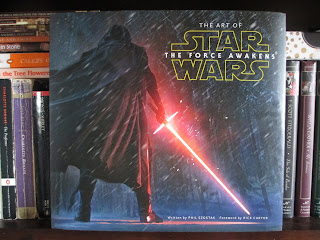 This one is more brief, though it still comes in at around 250 pages. The images are more done by computer, often collaborations from different people who worked on the movie (one did the background, one did the characters, one colored it in, etc.). There are also a few photographs (just a few). The computer-made images are less interesting, to me, to look at of themselves--so I was focusing a lot more on the decisions they were making design-wise in each image (which, of course, is the point: it's concept art).

The commentary felt fairly brief to me. Each section has a short introduction, maybe a couple of paragraphs, that's focused more on explaining who was working on the project at the time/who had stopped working on it and what exactly they achieved during that time period (an approved design for Kylo Ren or a certain ship, etc.). Then the pages with the images tend to have a couple of quotes about the images. Each image does have a caption with its title and the artist; however, these captions usually weren't enough for me. I wanted to know a little more. Sometimes I almost felt a little confused about where the images were for, which set or which part in the story. And sometimes I just wanted to hear more elaboration, more talk about what they liked about one design or why it didn't work out. I wanted a little more discussion. I guess the images are supposed to speak for themselves.

Which, I mean, they do: I'm not saying this wasn't a good book. There is a lot to look at and any glimpse into the creative process and how a concept grew into a movie is interesting to see. Some things started out very different from the final product. The way the book is organized (by timeline rather than by object, location, or character), you may get a couple of pictures of ships next to some images of Kylo Ren, then get another group with more ships and some characters in Maz's castle, then maybe the Falcon and more pictures of Kylo Ren. I'm more used to having each item grouped together (all the pictures of Maz's castle together, instead of spread around, for instance), but this format does give you a better idea of how the process actually happens: not everything is linear.

Posted by Deanna Skaggs at 2:16 PM