If I hadn't been wondering whether or not this book was worth getting and then ended up really liking it, then then there probably wouldn't be much need for a post. But given these two facts, I think a post is in order.

Like everyone else, I love Rey's character--and I knew she would be great even before the movie came out, just from that cool outfit they gave her. So a book called Rey's Survival Guide, which would presumably be about her life on Jakku? Sounds great. But, you know, you see the cover (which is designed almost like a magazine), you see that it's a short 96 pages, and you see that the age group is 6-9 years, and you sort of wonder if it's a book you should be getting, after all. But it's also $10 (I got it for around $8), and it's a nice and sturdy hardcover. 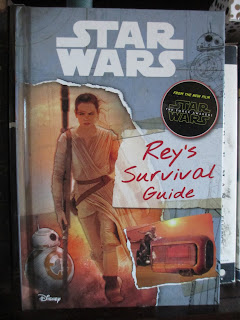 So I bought it and I finished reading it pretty quickly--and it was pretty good. It would have been much nicer if the outside cover matched the inside; it needs to have the look of a journal on the outside, too. That would be a better indication of what's on the inside. This book is designed just as if Rey put it together, writing commentary and drawing in pictures and putting labels on things. She moves from topic to topic (the landscape, the ships, the people, etc.), describing what she has learned from her time on Jakku and how she manages to survive living there.

It's pretty bleak content, really. We've all seen Jakku. It's a sandy, hot environment with no cities or means to earn a livelihood except for scavenging in the graveyard of ships, attempting to sell salvage to Unkar and hoping he'll give you a fair deal. So whether or not you want a six year old reading Rey's cautioning that you can slice yourself open on jagged metal inside one of the ships is up to you (or about how the ship graveyard is full of the bones of all the people who were on the ships). But it's interesting reading: it has just enough hint of a storyline, even though it's really just descriptions of different facets of Rey's life without many actual events.

Though there are a few hints of events scattered around. If you read Before the Awakening, you'll see Rey's references to the ship she worked on in that book. And she talks about her childhood a bit. It's like you almost have hints about who she is or how she came to be where she is--without actually getting any info. So that's great for feeding the great mystery about Rey's identity (because even if she is Luke's daughter, how exactly did she end up on Jakku, and without any memories of who she is?).

There is a decent amount of description of the ships and their different components in here since that's a huge part of Rey's life, picking through the crashed ships to find anything salvageable. Even though it isn't in too much depth, I'm still thinking that most (not all, of course) 6-9 year olds would find it a little too much to read about, though I suppose they could look at the pictures without reading all the text (but the text is printed out in a way that where it looks meant to be read). So I'm really not convinced that that's the target audience (which is why I wish the cover were a little different). Sure, the text isn't too lengthy or too in depth, but it's something that I think people of different ages who can't get enough of the movie or are curious to learn more about Rey will enjoy flipping through.

And honestly, I really love the handmade feel of the inside of this book. The font is designed to look handwritten but it isn't too sloppy, childish, or hard to read. The sketches are great to look at. (Though I do think it's odd how every so often something is made to look like it's taped in. Tape doesn't feel very Star Wars, and even if Rey did have tape, would she really use it just for a journal?) There are also a few fold-out pages, including a great one of an AT-AT. I'm kind of in love now with Jakku (as a fictional place because no, of course I don't want to go live there). So if you're interested in this book but not sure if you should get it or not, I'd definitely say to get it.

Posted by Deanna Skaggs at 8:07 PM