Having been seeing BookTubers talk about beautiful book covers and show off some really lovely-looking books, I thought to have a look at my own shelves and stacks of books to see what good-looking books I own. Then somehow it seemed that I wasn't finding books like the ones the BookTubers show--partly because I don't own many that look like that and partly because, perhaps, my tastes are a little more singular.

First of all, I won't buy a book simply because it's pretty: it has to be a book that I think I might want to read or a book that I've already read. For instance, I bought this lovely vintage copy of Wuthering Heights even though I already owned the book. It has Heathcliff leaning strikingly against a tree on both the front and back and a green spine that suggests that it used to have a book jacket. This is one of my favorite book covers: I can't resist trees. 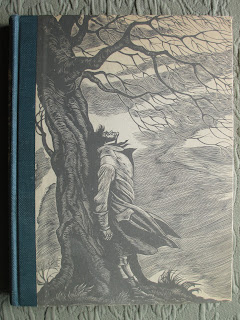 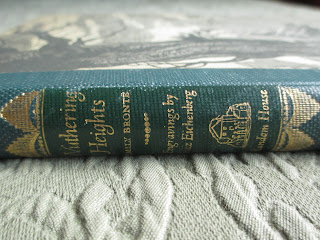 I was also finding less "beautiful book covers" because many of my books happen to be classics, and classics tend to all look the same. The Penguin books with the black spines, the Barnes & Noble classics with the pastel spines, and the Norton editions with the generally darker yet still colorful spines, and all with some sort of classic painting on the front that may or may not have anything to do with the book. Some of those paintings are quite pretty and make the books look nice, but somehow I felt like that wasn't in the spirit of what people mean when they talk about "beautiful book covers," so I deliberately left all of them out.

Next I found myself alighting on The Space Trilogy from C.S. Lewis. This trilogy is one of those lesser-talked about things where everyone who's read it simply can't understand why hardly anyone has read it. This trilogy's pretty good (the first one's pretty standard sci-fi style, the second is more philosophical, and the third may be more of a preference that not everyone might like as much), and these covers help show off their highly imaginative (yet deeply thoughtful) style. I only have to see these covers to want to dive into this trilogy again--or to have memories coming back at me of what was in these pages. 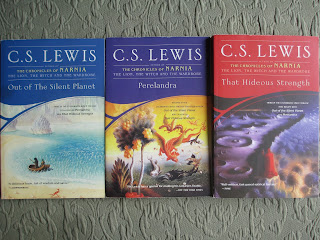 I couldn't resist throwing in The Silmarillion, too: that picture, with those colors and that lighting, just makes this copy irresistible. I didn't include the illustrated edition, though that one's nice, too. I also avoided my long row of movie books: somehow I felt like that was a different category that shouldn't be brought in with the novels. 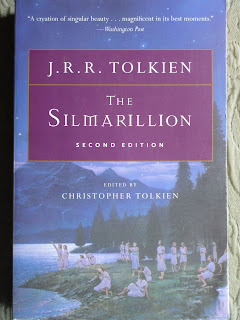 Here's a random one. I bought this book and its sequel (which are part of a trilogy) because they were very pretty. Many of the similar books also have similar covers of pretty Victorian women, but I always liked the simplicity of this one. Keeping the color palette to a dusty pink makes it softer and classier. The trilogy itself I have mixed feelings about: sometimes I think it isn't very good or singular, but other times I find myself thinking back to the story and wanting to read it again. But the cover remains pretty. 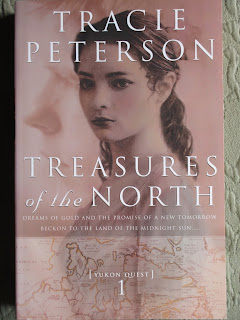 I'm just adding this one out of stubbornness. I deliberately left out the big, hardcover, leather-bound Barnes & Noble classics because nearly all of them are gorgeous and I don't think you need me to tell you that. The Arabian Nights, the Jules Verne set, and Little House on the Prairie are some of my favorites. I did, however, have a strange inclination to include something from Barnes & Noble's extinct Collector's Library series.

I absolutely adored these and managed to collect several before they vanished. See, I'm the type of person who tends to feel self-conscious reading a book where other people can see its cover, not because I'm reading anything I should be embarrassed about but just because that's how I am. Especially back in school I didn't like books with huge pictures on them (to this day I put books, no matter if they're fiction or non-fiction or have completely blank covers, upside down when I set them down). So it was like this series was made exactly for me. 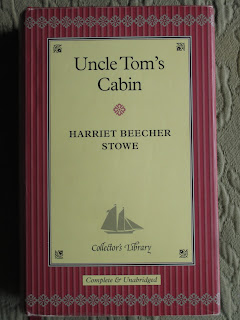 The books were bound in red cloth and then given a striped book jacket of one of various colors: red, blue, green, orange, or yellow were the usuals. The pages were edged in gold and there was a red ribbon bookmaker built in. 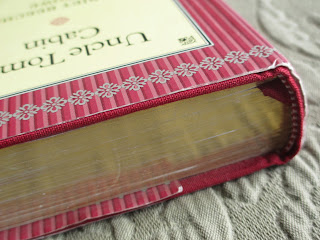 Best of all, they were about five to eight dollars and were what would probably be considered pocket-sized. Take a look at Uncle Tom's Cabin (which is over 600 pages) next to the average-sized Tracie Peterson book: it's much smaller, easy to hold and easy to store in a purse, all without the distracting pictures. Ideal. (The text, by the way, wasn't really smaller than the average size for classics--it was even bigger than it is in some editions.) 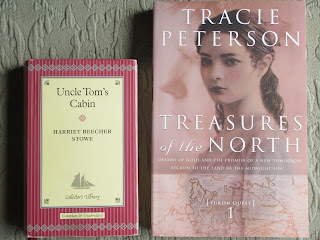 Maybe. But maybe it also means that I want my beautiful books to be books that I have already formed a connection with. I tend to favor plainer or simpler covers for books I'm unfamiliar with, and then when I know what a book is about, I want to see its essence poured out on the cover in a piece of art.

The reason I don't need all my books to be spectacular visual creations is, I suppose, because I fall into the category of people who prefer physical books to e-books. I don't need the beauty of a book to justify its existence as a physical item: its mere physical nature is beautiful to me and is, most of the time, enough for me.
Posted by Deanna Skaggs at 1:00 PM