Disneyland is, I believe, in the blood of people who are born in California. And I, like many Arizonans, was born in California--and so I have my eternal allegiance to Disneyland, that place of hopes and dreams that just turned 60 years old on Friday.

Though I am interested in Disneyland past and present and spent hours during my middle school to high school summer breaks reading about Disneyland online, I haven't really read many books on the park/s. So a couple of years ago I bought this one, thinking it would be a good way to dig in. The Disneyland Encyclopedia: The Unofficial, Unauthorized, and Unprecedented History of Every Land, Attraction, Restaurant, Shop, and Major Event in the Original Magic Kingdom by Chris Strodder (mine is the Second Edition). Yeah, exciting and first and then a bit intimidating. 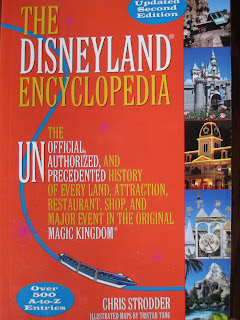 The text is basically about 450 pages of encyclopedia-style entries, which was enough for me to let this book sit in waiting for about two years. But this year being Disneyland's 60th Anniversary and considering that I'll be there later this month, I thought to myself that now was the time to read this book. I thought it would be good to read about ten pages or so, slowly, over two months. And you know what? It turns out that this isn't as intimidating a read as I thought it would be.

There are some very pretty Disneyland pictures out there with artful pictures and historical pictures and all sorts of things that make them nice to flip through. This book isn't like that. There are a few (mostly present day) pictures just to set the scene, but mostly it's about the straightforward text. Names of attractions, dates they were open during, people who worked on them, descriptions as needed, and even a bit of guests' general reactions. It's all very informative and the format makes it easy to quickly look up a fact without having to skim through a whole chapter.

Most of the entries are short, a couple of paragraphs, but the longer ones merit a couple of pages, usually not more than two or three. So if you do choose to read cover to cover, it's all at your own pace, and you can go as slowly as you like without having to stop right in the middle of something.

For being so straightforward, the writing style is also easy to read: it isn't dry or overly "factual" because there is just enough personality to keep you interested in continuous entries of extinct attractions. And it was all very fascinating: there were many things that I had heard of before but never really knew the details about or other things I was familiar with but didn't know the full story behind them.

This is the perfect book if you're interested in Disneyland's history (or facts you can use as trivia), whether you're just starting to dig in or you already know quite a bit. In the first case, you can read it al the way through like I did; if the second, you can also read through or just flip through individual entries from time to time. Either way, it's a useful reference book that I wouldn't mind having with me in the park: just imagine using it as a way to pass the time in line, quizzing your friends/family and reading out the sections that have to do with the part of the park you're in. If it were just a bit smaller, I really would bring it. As it is, I'll leave it either at home or the hotel and call it a great purchase.

Posted by Deanna Skaggs at 2:56 PM