Jumping into the Children's Crusade

A while back, there was this movie streaming on Netflix called Crusade: A March Through Time. Given that I used to watch a lot of movies during my college days (almost one every night, sometimes more), I watched this one just because it was there, not because I thought it would be a great movie. But I enjoyed it. And then it kind of stuck with me so that I found myself watching it again at least once more and then thinking of it from time to time.

Recently it occurred to me that since this movie was based a book, maybe I should read the book. Now both the book and the movie are from the Netherlands. So if you want the book in the U.S. you have to order it: no one will have it in stock. The book was first published in 1973, the translation into English is from 1975, and the cover imagery on my copy is from the 2006 movie. 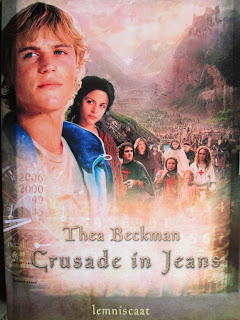 The basic on the story is a teenage boy from modern times travels back through time and encounters the Children's Crusade. Not certain if/when he can return to his time, he stays with the children and seeing the horrible conditions they have been traveling under, helps them get organized in terms of food, protection, and other means of survival. So technically it's a story about time travel, but since the bulk of it takes place in the thirteenth century, it's almost more like straight historical fiction. And the beauty of it is in its simplicity.

That was what interested me about the movie, I think. It was somehow different from anything else. It's straightforward in the way that it approaches events, and the book is the same way.

For being a children's book (I'm not sure what the exact age group is--middle school to high school perhaps?), it contains many of the horrors of this era in history. Death, disease, injuries, animal attacks, battles, yeah, it's all in here. And yet that matter of fact tone that everything is described in somehow makes it okay: the events and the descriptions of places and everything else are described almost like records, like you can see them happening right in front of you and therefore you can't complain about something that is described because it did happen. Does that make sense? (By the way, while the book does describe all of these, um, horrible things, it isn't graphic about it--this is still a children's/YA book. I definitely would have considered it on the graphic side for what I'd read when I was twelve, but that's as far as it goes. In case you were worried.)

It's like, in a very simple way, this book plunges head forward into deep topics--and yet does not pretend to do anything other than present the reader with events that are happening. If you want, you can react to the book and ponder questions of faith, of science, of psychology, etc., but hardly any of that pondering is in the book. The book just gives you what happens. So you can also just take it as an adventure story. It can be sad or it can be exciting: it's your choice. And somehow that makes it incredibly moving--maybe because it makes it feel real.

I'm probably doing a horrible job of trying to get you to read this book, but I really do recommend it if you like historical fiction or you're just looking for something a little different; this story is special. And watch the movie, too, if you get the chance--it's a little different from the book but also very alike in tone and essence. I really want to watch it again now but it's no longer streaming on Netflix and the DVD isn't available from them, either; I might just buy it but I'll have to wait until next month or so and by then I might decide I don't need it. I don't know; we'll see. Until then, I'll just keep reliving it all in my head.

Posted by Deanna Skaggs at 9:31 PM