As I've said before, chocolate from Trader Joe's can be hit or miss--but when it's good, you can find some pretty great deals there. The 65% Cacao Single Origin Ecuador bar has been catching my eye for a while now; will it hold up to the test? On the outside, it looks good. The style is a blend of the Trader Joe's advertising/packaging look with the look of fine/semi-fine chocolate card boxes. A black background lights up letters in blue and green, colorful flowers, and a mountaintop to create a simple look that pops. 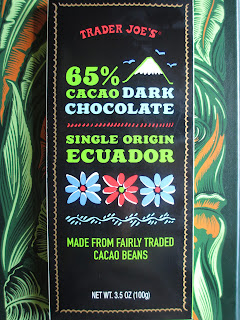 As you can see, the box lists the cacao as fairly traded, another plus. Trader Joe's is one of those stores that sells certain items that are organic and fair trade and others that aren't (the organic bananas are here and the nonorganic bananas are there, the fair trade coffee has a label in front of it and the non-fair trade coffee doesn't, etc.). What they have available in items like chocolate varies even more depending on what they're able to sell at the moment; so the fact that this is supposed to be fair trade chocolate is a definite plus.

Ingredients-wise, it's interesting to note that there is no vanilla added. As you know, vanilla is added to most chocolate; it helps add in some flavor if there is any lacking or to smoothen out the flavor. But if I were to go by taste alone, I wouldn't have realized there was no vanilla: this chocolate is very flavorful. 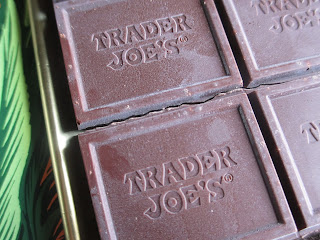 I'm not sure if the light bloom on the chocolate was there when I bought it or developed after I kept it waiting for rather too long before opening it. In any case, it doesn't hurt the flavor. My bar of chocolate was a little on the hard side, not melting as nicely at first. But it's wonderfully fragrant, with what I would describe as a reddish tone (as opposed to blue--most chocolates either lean toward red or blue to me).

The back of the package describes that the chocolate is made with Arriba cocoa beans grown along the Guayas River. Hmm. Amano (one of the best chocolatiers) makes a Guayas bar (theirs is 70% cacao). Another good thing: information about where the chocolate is grown.

"Subtle fruit and floral notes" are what the card box claims this chocolate will have. I'm impressed that it has enough flavor as it does for being only 65%; 70% is more standard. Yet the slightly lower cocoa content seems to let in just enough sweetness to keep the sharper flavor notes from becoming bitter or too dark for most palates. I would say it tastes from fruity initially, then more floral after it's melted away. It also has what I describe as "brownie redness," this wonderful chocolate warmth that spreads through your mouth and takes a moment to dissipate. Yes, warm, enveloping, and just bold enough is what this chocolate is.

It's also one of those good deals that sometimes show up at Trader Joe's. At 100 grams, it's quite a big bar, so you definitely get a value here, especially as opposed to the usual prices of finer chocolate. If you haven't tried it yet, I'd recommend picking it up next time you're are Trader Joe's before it's gone.