Happy July 1st, everybody--I'm super excited because the 4th is almost here. I'm celebrating already by wearing red today, white tomorrow, and blue on Friday. Saturday I'll be all decked out in all three colors.

So for today I'm just going to review a casual chocolate candy from the U.S. that is also semi-regional. They sell a lot of chocolate rocks (both this kind and other kinds) at shops and museums around Arizona because they look good with the other tourist mercy and they hold up to heat a little better than other chocolates. I've also seen them for sale at World Market. These particular ones are made by Kimmie Candy Company of Reno, Nevada. They proudly say on the label that they're "100% Made in the USA." 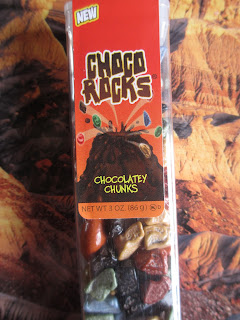 For chocolate, they really do look a lot like rocks. They come in various colors: light blue, sage green, pale pink, earthy red, golden tan, and coal black. Each color has that gritty-looking texture, though they're almost smooth to the touch. Shapes range from tiny to triangular to long and thin. From looks alone, they're great. 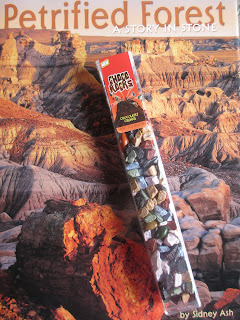 Basically, these candies are M&Ms. I know they look like they would be rather different, but they're very much like M&Ms. A thin, crunchy, colorful coating of ingredients that shall not be named surrounds a small piece of chocolate. I never thought I'd say this, but the chocolate in M&Ms is better than in these: this compound chocolate. If you're unfamiliar with the phrase, it means they added palm kernel oil to the chocolate; it's cheaper this way.

You know the Palmer chocolate they sell around Easter? That's compound chocolate. So recall that taste. I used to think that chocolate was pretty good when I was seven; it had kind of a nutty taste. But now it just tastes undeniably cheap. So I'm terribly disappointed that that's what these rocks are made with. I'll let you be the judge, though: at the same time as I see it as cheap, I'm also getter a nice fudge taste from it. 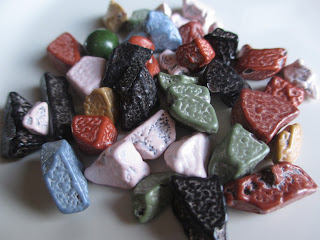 You know what I do like better than in M&Ms? The shell is thinner. It makes a light crisp sound when your teeth touch it that makes it, in my view, much nicer than the hard cracking of the M&Ms shells.

Basic story: this is good-looking novelty candy that most people are also going to enjoy eating. It would just be so much better if it wasn't made with compound chocolate.

Posted by Deanna Skaggs at 1:07 PM