Do you have a cocoa content preference? I tend to say that chocolate in the 80% range is my favorite--provided it's nicely done, there can be a wonderful range of flavor as well as an all-encompassing deep taste that is quite unlike anything else.

Now, I've been feeling like World Market hasn't had much interesting on the chocolate side these days--at least, the interesting things they have are things that I've already tried, and I always like the chance to try new chocolate. Chocolat Stella is, however, one of the brands I've been seeing there lately. The simple packaging strikes me as boring enough, though, that it's taken me a while to get to trying one of the bars, despite glancing at the ingredients list to see positive signs. 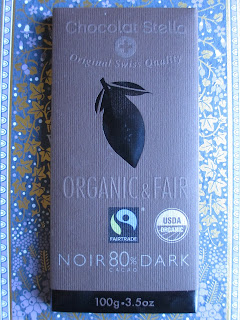 Just cocoa, sugar, and vanilla, and all three are fair trade and organic. Those are good signs. And, honestly, so is the fact that it's made by a Swiss company: I've had better chocolate from Switzerland from Belgium (it seems like the only Belgian chocolate that makes it to the U.S. is cheap and mass-produced, meaning that I'm more likely to avoid something that says it's Belgian than to go after it). After all, there are a lot of important points in chocolate's history that took place in Switzerland. So should I forgive the bland packaging? I mean, it's okay: a brown box with a black cacao pod could be simple and sleek, but somehow the way the design is carried out doesn't hold my eye. 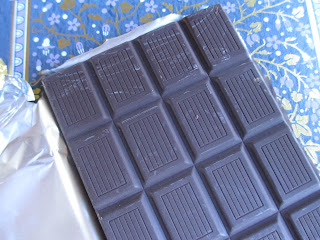 The answer to my question is most definitely yes. Let my bland photographs (sorry, it was bad lighting when I had to take the pictures) express my slight misconceptions about this chocolate: what I wasn't excited to try turned out to be very good.

Aromatic and just lightly bitter in its scent, the chocolate has a good and clean snap when it breaks. The taste is dark and bold as it begins to melt in your mouth and the almost bitterness fades into warmth and richness. Usually I call dark chocolate either blue or red in the feel of its flavor (I was never so great at flavor notes, so I settle for colors instead, I suppose); this chocolate appears to be neither. Maybe it's purple, a combination of the two feels. The warmth of the red but with the coolness also of the blue. Overall: extremely chocolate in its flavor. It's also smooth and not at all either gritty or plasticy. It does perhaps leave a slight bitter aftertaste, but not bitter in a bad sense--just bitter as a flavor.

You know what I know one of the secrets is with this chocolate bar? Good ingredients. The cacao has to be good and anything you add to it has to be good. The vanilla is listed as vanilla pods, so I figure that means that Chocolat Stella isn't just using any vanilla they find lying around: they're using good quality vanilla. Sugar, too, I deem. This is just a completely plain dark chocolate--and that is its strength.

If you're craving a good dark chocolate, definitely give this one a try. Despite 80% cocoa being a little higher than average (which is more around 70%), I wouldn't call this an overly dark or intimidating chocolate: I'd call it approachable. And being that it tastes primarily of chocolate without piles of flavor notes, it will also satisfy a regular chocolate craving. I'm impressed. I'll have to try more of Chocolat Stella's bars the next time I'm at World Market.
Posted by Deanna Skaggs at 11:20 AM