From First to Second

Technically, though, it was less. I didn't want to watch too many of the Classic episodes at the same time as the new episodes, which were still airing at the end of last year, so I put the Classic ones on hold. And then I had to give myself time to transition from William Hartnell to Patrick Troughton. That was really hard. Really hard.

I liked William Hartnell, and then it was also hard to lose him because there weren't really any familiar companions to help smooth out the transition. The missing episodes meant that the companions at the time of the Doctor's first regeneration felt like strangers to me: I had barely met them and they didn't feel worthy to guide the First Doctor into the Second. That's what it felt like: like the Doctor and his companions were suddenly all strangers and I didn't want to watch strangers. Then the great amount of missing episodes in the beginning also made it hard to adapt: by the time I was able to watch the Second Doctor, I had missed the settling in and he was already settled in, while I wasn't.

Jamie and Victoria helped, though I'm sad that their first episodes are missing and so I never got a proper introduction to them (I do read the summaries online of the missing episodes). But I liked Jamie and Victoria almost right away. They were both from points in history instead of modern times: Jamie with his brash and courageous (and yet also gentlemanly) ways and Victoria with her delicate face and demeanor. It was they who helped me soften to the Second Doctor: through first liking his companions, I was also able to like him.

Then Victoria was gone, and we got Zoe instead, and while I missed Victoria, Zoe was a good character and completed the trio nicely. While Victoria was from Victorian times, Zoe is a modern character (since she's from the future): she's young and pretty and yet she's very smart and quick to give her ideas and opinions, too. I love when Zoe is giving complex calculations to the men at UNIT in The Invasion. Her intelligence makes her a good companion to the Doctor: he has someone there who can understand some of the sciencey things he talks about or refers to and can help him make plans.

Jamie, on the other hand, is a fit for the Doctor's courage and willingness to get into the middle of situations. I like the fact that he's uneducated and the show is constantly pointing out that difference between him and Zoe: it somehow makes him more endearing and yet also makes him no less valuable in the Doctor's travels. The Doctor trusts Jamie more than, I think, any previous companion, and they get along as well as the Eleventh Doctor and Amy Pond. These are two characters that are just meant to be in the same place, and so it was a pleasure to see them interacting on screen. I'm going to miss Jamie just as much as the Second Doctor.

At first I wasn't exactly sure who the Second Doctor was or was supposed to be: he was William Hartnell's replacement, so was he meant to just be like William Hartnell's Doctor, just a little younger and a little more able to move around and be in more scenes? But with time, I became familiar with Patrick Troughton's particular quirks and I think also he became more able to put himself into the character. If the First Doctor is the grandfatherly character, the Second is the avuncular character. This is why he can get a little closer to his companions: there isn't quite so much distance between them. He's the silly uncle who goes around on adventures acting like he knows what he's doing but not fooling anyone (Jamie always makes fun of how he can't control where the TARDIS lands).

He has authority--but he also has vulnerability. He's quick-thinking, but he's not able to save everyone or everything. He gets frustrated when he can't control everything, but I think he never gets too much of a depth of sadness (certainly nothing like the Tenth Doctor does). It's like he's still figuring out the world and his place in it. When he first brought out the Sonic Screwdriver (well, I know the first episodes is missing, but I mean the first time I saw it), I unexpectedly got really happy; it was funny, though, to see the way he uses it. It was more like just a screwdriver before: and that's like he hasn't quite found out all the uses it can have yet. It's a tool he's still getting to know. There is so much he knows but also so much the Second Doctor doesn't know yet.

It's amazing how this happens: I was so reluctant to meet the Second Doctor and now I really like him. 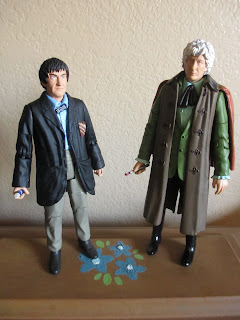 Can I just say that the last set of episodes, The War Games, were amazing? Everything about them, I loved those episodes, they were wonderful, and I didn't want them to end. That was a really good way to end the Second Doctor's reign. But now I'm hesitant for the future.

Maybe most people would look forward to finally starting the color episodes, but I'm reluctant. Black and white is much more forgiving for mediocre (or dated) sets and effects, and of course it also hides dated color palettes, making things a little more timeless. Color is unforgiving. So I'm not really looking forward to that.

And then now I'm leaving behind the episodes from the sixties to begin on the seventies. I like sixties TV, but the seventies? Weren't the seventies kind of weird? I don't know: it's like I'm expecting the show to get goofier instead of just quirky, and I'm a little afraid of that happening.

And then I have this Third Doctor to get used to, this third actor to replace someone I've grown accustomed to. It's so sad and so hard, every time.