Forget Swiss Miss hot chocolate; I used to drink it all the time when I was ten, but eventually I upgraded to Nestle's Abuelita chocolate (Ibarra is very similar). As far as hot chocolate (sorry, I make no distinction between hot chocolate and hot cocoa: I always think of hot cocoa as an old-fashioned, not a technical, term) from the grocery store, I generally consider Abuelita one of the better options: the round discs of sugar and chocolate appear to have more chocolate in them than the powdered milk, sugar, and chocolate powders of the Swiss Miss and similar varieties.

A friend of mine brought back this hot chocolate from Tucson, where the woman in the shop had claimed it was her favorite ever. Honestly, I'm a bit confused on how to label it. The name up top is Rancho Gordo, but that's the importer based out of Napa, California. The little snippet on the side explains that the chocolate is "grown, roasted, and ground by the Mujeres [women] de Xochis Collective in Guerrero, Mexico using local cacao and evaporated cane juice. The chocolate beans are roasted on clay pans before being stoneground with soft cinnamon." And the box has "Chocolate" written all across it, while this little section calls it "hand crafted stoneground cacao for drinking and cooking." So I've settled for leaving Rancho Gordo as the company and drinking chocolate as the product name. 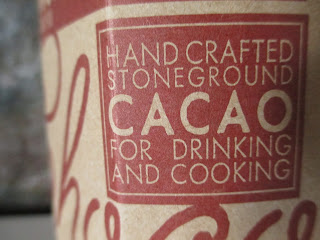 The style is very similar to Abuelita, except for the details. This six-sided box is just a tad smaller and thinner and is plain, uncolored brown with brown lettering as compared to the bright yellow Abuelita box. This natural look is, from my view, much preferable, and promises something more natural and (hopefully) of greater quality. Inside, the five round discs are individually wrapped in wax paper and then stuffed into this clear bag; it's all perfect for keeping them fresh. 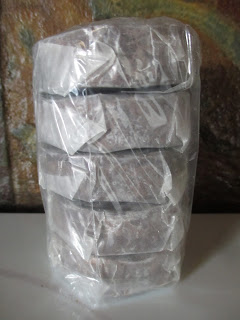 The minimalist look continues onto the discs. Instead of being divided into eight pieces as both Abuelita and Ibarra chocolate are, the circle is plain and without markings of any kind. You decide if it looks sad or rustic or elegant like a flourless chocolate cake. Funnily enough, even though I'd thought that the lack of markings would make this disc harder to break, it in fact breaks easier than Abuelita chocolate tends to. Just pierce a knife into it where you'd like it to break and you'll find that the chocolate is quite soft and willing to work with you. 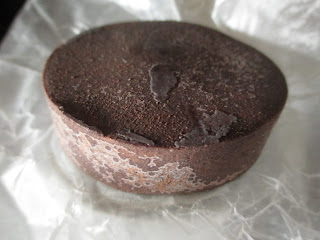 I've come to admit something to myself: except for a small cup of elegant (and usually flavored) drinking chocolate from time to time, I don't like to drink thick chocolate. I'd go so much as to say that I'd rather melt a bar of chocolate and eat it with a spoon (which, of course, I have done before) than to drink certain hot chocolates as thick as the instructions say to make them. I have found that I like this particular hot chocolate with half of the chocolate that's recommended: that means one quarter disc per cup as opposed to half a disc. And this is, in fact, more like the ratio for Abuelita, in case you were wondering. 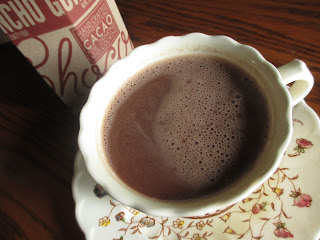 Note that, as always, I'm doing my review of this chocolate as made with almond milk.

There are simply three ingredients to this chocolate: cacao, evaporated cane juice, and cinnamon--in that order. Abuelita places sugar in first place, adds vegetable oil, and uses artificial flavor. So if you're just looking for purer, better quality ingredients, this chocolate definitely wins: I give it much respect for that alone. And hearing all of that info about how the chocolate is roasted on clay pans and stone ground makes me really look forward to something special. The question after tasting, though, is whether or not I prefer this flavor.

It's good hot chocolate. It tastes like chocolate and only faintly like cinnamon. It isn't bitter or dark and yet it isn't particularly sweet, either. There's almost an earthy flavor to it that I can't quite place--I'm not sure if it's the lack of sugar that gives it this flavor, if it's a flavor from the chocolate itself, or if it's a product of the way this chocolate was prepared and the tools with which it was prepared.

You see, when I drink this chocolate, I enjoy it. But I'm not left in awe of it. And then when I pick up the box of Abuelita chocolate and sniff it, my mind smiles at the familiar aroma and happily pictures the taste. Is it just nostalgia?

I don't know. It could be. But the fact remains that I'll continue buying Abuelita chocolate and if I were to come across Rancho Gordo hot chocolate myself at some point, well, I might or I might not buy it. It would just depend on whether or not I felt like buying hot chocolate on that particular day: I wouldn't feel like this chocolate was so delicious that I absolutely couldn't pass it up.

With that said, however, I still highly recommend it for the sake of its ingredients: this is more how hot chocolate should be made and it shows in the fact that this drink tastes primarily of chocolate--the main ingredient for which it is named and which so many hot chocolates out there barely use and therefore barely taste of.