Let's give the chocolate bars a rest and bring out the cookies today, eh? Anyway, we need a little of the simple pleasures around here: first there were the 3.2 and 4.1 earthquakes on Sunday night (Flagstaff and a couple other areas get earthquakes, but not central Arizona) and then lots of wind and rain and some hail today (actually yesterday, when I started this post--it's still raining today, just no hail) (which isn't unusual since it's a wet year, though I haven't seen hail in a while). So, yes, bring out the cookies. 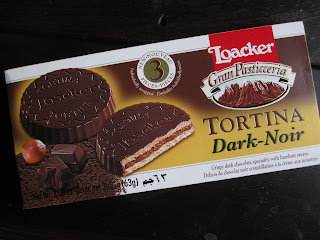 I'm not sure if cookies is the right name. When I saw the package and saw that it had hazelnut cream, I was picturing some type of cookie. But there are in fact only three, individually packaged cookie confections. The box calls them tortina. Each one has two layers of wafer with the hazelnut cream in the middle; the whole thing is covered in dark chocolate. The wafer part is as exciting as the hazelnut: Loacker is the brand that makes those wonderful chocolate wafer squares (there are other flavors, too, but the chocolate ones are the best). So whether you want to call these sweets cookies or wafers or some other name, they do promise to be good. 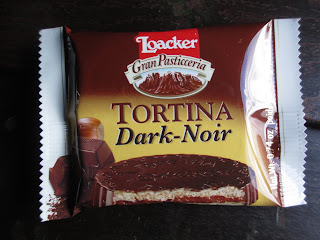 Each one is around a couple of inches across, perfectly round and good-looking enough to serve to guests with dessert (if there were more than three-just-for-me circles in each box, that is). As with Loacker's other wafer products, the wafer is nice and soft, crunching in just the right way without interfering with the softer cream and chocolate. You can taste the hazelnut and chocolate in pretty balanced proportions to each other. Either or both of them brings in some sweetness, which rounds off the crunch from the wafers. 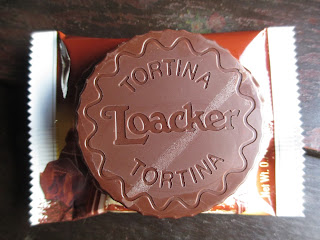 One mild complaint for me is the chocolate. It's the sweeter type of dark chocolate, which I generally (or pretty much always) don't care for. But this one isn't so gloppy or unrestrained or tasteless as others, so don't let me scare you away from it. If I'm reading the ingredients list correctly (lists that are made for/by other countries include so many more percentages than lists just for the U.S. do), the chocolate is 60% cocoa. So nothing dark or bitter at all. And as you can see, it's a thin layer (as it should be), so it doesn't have the chance to overwhelm the taste of the hazelnut or the texture of the wafers. 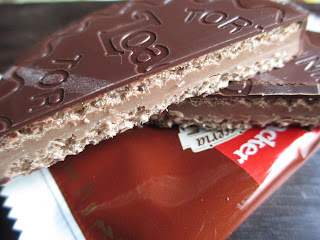 Balance is the word that comes to mind with something like this. Loacker knows how to balance flavors and textures--which is exactly what makes for addicting eating (think Doritos). I would definitely buy these again, maybe like a once in a while treat (like Arnott's cookies--which I should probably do a review for, as well, since they're one of my favorites). It just depends on whether World Market has them as part of a seasonal display or if they're there to stay. Hopefully to stay, right?