I have a confession for you all: I'm a writer and not just of blog posts. It has come to my attention that I am crazy (or perhaps overly cautious is the word) for not making some of those blog posts about writing; or maybe the timing just wasn't quite right yet. But it is now. I'd like this new series to come at intervals, updating you on what I've been doing. But first I have to update you on what I have been doing up until now. 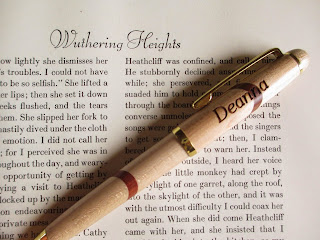 Way back during my senior year of high school I started to get this image (of a tree, that is) that I wanted to put down in writing and so I thought I would use it for a scholarship that involved writing a piece of short fiction. So I wrote out this little tableau and I edited it and I tried to get a whole theme and story into it. But as I worked, I realized that I was constraining the image too much by trying to stay within the (fairly short) word count required by the scholarship. So I decided to throw away the idea of using it for the scholarship and let it just grow as much as it wanted.

I worked a little bit on it during the rest of senior year. And then I graduated and went off to college and became a bit more busy. So I was never putting full time work into this piece of writing, but I would return to it now and then and add a scene or another image. I tried to put the date on most of what I wrote because I thought it might be interesting, later on, to see exactly when I wrote particular sections. I would handwrite everything, often on the blank backs of old papers that I didn't need anymore.

I started writing a second narrator and then decided that the two narrators could be put together. Then I added a third narrator. And it all kept growing, tiny piece by tiny piece.

Eventually I typed up all of what I had so far, printed it all (on four pages per sheet so as not to waste paper), and then cut out each individual section and started arranging everything in chronological order on the floor.

You see, I had heard writing advice; I'd heard that you don't need to write first drafts in chronological order. But I always thought that I was a chronological writer. That's how I used to write essays: I would picture the whole thing in my head before I wrote down even one word. But I found that I was writing this project differently, image by image. And the order that I got the images in wasn't necessarily chronological order, especially since I had settled on three narrators simultaneously telling three separate stories. So I ended up with lots of little pieces that needed order, and physically arranging them on the floor, though not a technique I'd expected from myself, turned out to be the best course to take.

Arranging them in order helped me see what pieces were missing, and I continued slowly adding to the project. And then I graduated college with a B.A. in English literature from ASU; I also attended their Barrett Honors College, where I did my senior thesis on three of Charlotte Bronte's novels. And so after graduation, I suddenly had the opportunity to spend much more time on this writing project of mine. That was back in 2013.