This product was provided free to me; my comments and opinions, however, are my own.

Yesterday was a lovely Thanksgiving. We tried cooking the turkey on the grill for the first time, and I was surprised at how quickly and well it worked out; that was probably the best turkey I've had. And the Christmas decorations are now up, all glowing and shiny. Yes, this is the season for staying at home, watching favorite movies, and eating lots of bread and sweets. Or maybe sweets on top of bread? 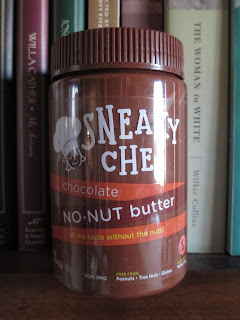 That's where this chocolate spread comes in. It's a Chocolate No-Nut Butter from Sneaky Chef. If, like me, you had never heard of Sneaky Chef before, here is their style: they make healthier versions of common treats, adding less sugar and sneaking in vegetables. (Here's where I hope it isn't like those bean chips and cereal I tried, which sounded like a good idea but just tasted like burnt beans.) So we know that this spread has no nuts. These days it's mostly about Nutella (while I love chocolate and hazelnuts together, there are much better, less plasticy chocolate hazelnut spreads out there) and maybe some oily chocolate spreads. The substitution for nuts in this spread is yellow peas. Interesting. I never eat yellow peas (I don't think I ever even see yellow peas), but the label tells me that they taste "naturally sweet and nutty," which makes them perfect for a chocolate spread. The spread is also non-GMO, has less than 1/2 the sugar of the leading chocolate spread, is soy/gluten/dairy free, and has no high fructose corn syrup, hydrogenated oils, or artificial colors/flavors. 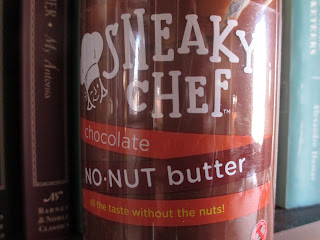 Whew. Okay, now that we have that out of the way, let's get to the tasting. Because if it doesn't taste good, then none of the rest of that matters.

I admit that I was surprised at how nice this spread smelled when I opened up the jar: it smells more like a fudge spread than just a chocolate spread. And it looks beautiful, going on nice and smooth. I tried it first on brioche toasts from Trader Joe's, which are halfway between bread and crackers and are therefore the perfect accompaniment for snacking on chocolate spread.

For how smooth the spread feels at first, it has the slightest dusty graininess in texture once you taste it. This, however, is not exactly a terrible thing, especially given that it doesn't have the plasticy texture of so many chocolate spreads (which is probably the number one thing I dislike in a chocolate spread). So just not being plasticy is a big deal to me. 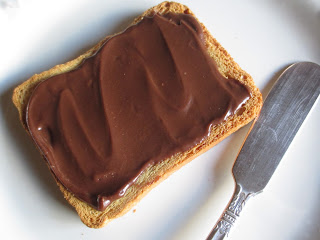 Now, when you have this spread on top of bread or whatever else, you'll basically just taste chocolate. But if you're eating it off the spoon, you will get a slightly earthy kind of flavor (not bitter earthy, something much lighter than that). Again, this flavor isn't bad; it's just probably a little different from what most people are expecting from a chocolate spread. The Sneaky Chef didn't quite cover up the fact that there's something unusual inside--but she did make the unusual element taste generally nice and make sense in the mix.

The sweetness level is exactly balanced, as is the taste of the chocolate, which is neither milk chocolate nor dark chocolate, just chocolate spread. And do you know what? The more I eat it, the more this spread is starting to taste like peanuts. I don't know how that happens. Now I'm getting tempted to get some regular bread instead of the brioche toasts, just so I can keep eating more. The press release also suggests adding the spread to cupcakes, or heating to make fondue. Cupcake icing sounds good. Maybe even add it to ice cream?

For me, the strange thing is the fact that this spread was not made for me. I don't have allergies and I'm fine with eating the vegetables and the desserts separately instead of mixing them. So this isn't something I would really have tried on my own, and I wonder if even now I would buy it on my own. And I'm not quite sure. The non-GMO thing is what makes me lean toward saying yes, as is the flavor. But then again I guess I don't buy chocolate spread too often anymore, so maybe that's why I'm not sure. The fact is, I think for people who do have allergies or who are trying to sneak vegetables to children (or themselves), this product will be a good fit. It achieves what it set out to do. And it tastes good. (They also make a non-chocolate version, by the way.)

Posted by Deanna Skaggs at 2:45 PM