Sorry that the alignment on this post is off: I keep setting it to align to the left but most of it just keeps switching to the center. I'm trying to figure out what the problem is.

Hmm, this chocolate is pleasant. A bit minty. Not overly pronounced, though. It's nice. But wait, what am I crunching on?

It turns out that I was crunching on pieces of sugared rosemary. I think that's a new ingredient in chocolate for me. 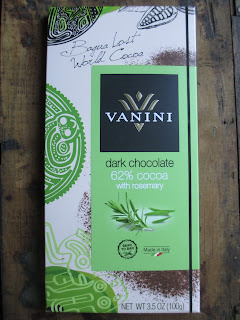 Vanini has showed up in the last couple of months at World Market. Given that it's a brand I had never tried before, naturally I had to choose something from their line. It's an Italian, bean to bar chocolate company; the back of the card box also has a Sustainable Trade logo and info about long term partnership with cocoa farmers. That all sounds good--and this 100 gram bar was only $4, which is in the lower price range.

The chocolate is made with Bagua cocoa, which the label tells me dates back many years to the Mayo Chincipe people (the date they give is 3000 AD, which I suppose must be a typo for BC since I don't suppose they got this cocoa from a thousand years in the future--unless it was just supposed to say 3000 years ago). Hence the "Bagua Lost World Cocoa" line on the front of the box. 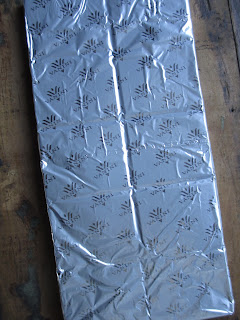 The attractive card box gives way to a foil-wrapped and sealed chocolate bar composed of ten squares. This is the part where I sigh: though sealing the bars in foil keeps them fresh, I do prefer to unwrap the foil instead of having to tear it open. Maybe I'm just strange. 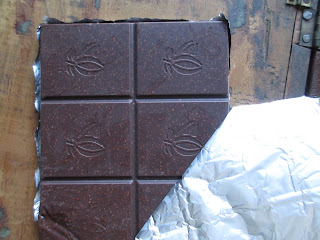 Rosemary, at first, may sound more like something to put on a turkey than in a bar of chocolate. But rosemary can in fact taste very similar to mint, as long as it's properly proportioned and placed. The chocolate here is 62% cocoa, which is fairly low but not in the bland 50% range. And it's just the right cocoa content for pairing with the rosemary: the chocolate doesn't taste dark but there is just a hint at sweetness in it that helps mellow out the rosemary while also not becoming so sweet that the chocolate is cloying.

And, yes, the rosemary is sugared, which as you can tell I didn't realize until after I started tasting the chocolate. Since it's in tiny pieces, the effect is almost like crisped rice that has been broken into smaller sizes; it has that same type of crunch. The sugar must also make the rosemary sweeter so that it tastes less like an herb and flows smoothly in with the taste of the chocolate. Never while eating this chocolate do I feel like it is an odd flavor combination: everything is in balance.

The only thing is that I can't really eat more than one square at a time. After that, the rosemary tastes does start to build up in my mouth enough that I don't want more. But I'd hardly call that a drawback: it just means that one bar lasts longer.

Given that it's rosemary chocolate, I do wonder how it would be to serve it at Thanksgiving. You could have it as an appetizer with maybe some type of fruit (pears maybe?) or after dinner to transition between turkey and dessert. Yeah, it's all about Thanksgiving to me.
Posted by Deanna Skaggs at 4:38 PM