More than a Princess, Scoundrel, and Farm Boy

You know what's interesting? Way back in my earliest memories of Star Wars, back when I was in the five to eight years old range, I don't remember thinking of Leia, Han Solo, and Luke as being a princess, a scoundrel, and a farm boy. The identities that they become and that they play for the remainder of the time became so quickly dominant in my head that I think I always saw them as the leader, the captain, and the well, whatever Luke is (he's a lot of different things, that is).

Yet this book is titled A New Hope: The Princess, the Scoundrel, and the Farm Boy expressly so that it can then show why these three characters are more than these simple, initial labels. I'm not sure that that needed to be proven to anybody--after all, other than the fact that people call her princess we never see Leia acting in a particularly royal status (she acts as a leader, yes, but with the destruction of Alderaan, she's not really a princess anymore in anything other than lingering title) and we only see Luke on the farm for a short while (and the most we see him working at the farm is in taking care of the droids, which isn't from our view a particularly farm boyish activity) and we all know that Han is just rough around the edges but does ultimately care. 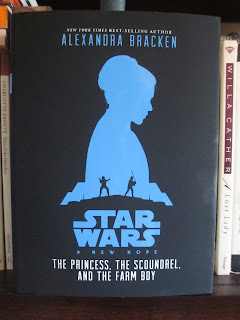 However. Just because this is something that didn't need to be proven doesn't mean that it wasn't great fun to see it proven.

Back when I read the announcement for this trilogy of books, I thought that they were supposed to be more YA/teen. But it appears that they're designed for a younger audience, I'm guessing around the 10-12 range, though I'm not sure if that was the intended age. At Barnes & Noble, I had to ask for help in finding them because I thought they might be in the teen section, but wasn't expecting them to be in the separate, children's section of the store. I almost felt like maybe I shouldn't be buying them if they really were for that young of an audience, but consoled myself with the fact that at least they were such beautiful covers. All in black with just one color, silhouetted image. A New Hope pictures Leia in profile, with Han and Luke in fighting stance. Under the book jacket, the colors are reversed: the book is blue with the silhouette appearing in black. Just beautiful, really; a great collector's piece. (I just wish it didn't have that soft finish that marks so easily when you touch it.)

The beginning of the book did feel a little dumbed down for age appropriateness. But once it settled in, I almost forgot I was reading a children's book. Yes, it's written in a simpler style, but it's the same content. On the title page, the book is called a retelling of A New Hope. I hadn't exactly been looking forward to reading this trilogy because I thought it would be just another rehashing of the story I've seen dozens of times already. But it's surprisingly fresh and original--especially considering that it's the exact same story. I'm not even entirely sure how Alexandra Bracken managed to do that.

First the book is divided into three sections. Leia tells the first third (in third person), Han tells the middle third, and Luke tells the last third. This means that Han begins his narration at the time when he first appears in the story, while Luke beings speaking after he's already been in on events for a while. So Luke's narration includes some brief explanations of things he's done that the book hasn't shown because it was focused on another character's narration during the time of those events: going after R2, rescuing Leia, etc. Somehow this format works. Leia is able to start in with showing resilience, Han follows up with acceptance of and appreciation of and care for others, and Luke finishes off with understanding his own ability and his capacity to effect positive changes.

There are exact lines of dialogue from the movies, paired up with additional lines and with enough narrator commentary that even lines we're all familiar with had some new context or were at least introduced in a new enough way to keep holding my attention. One or two rough areas are smoothed out, giving some cohesiveness between the stories in the OT and PT.

And it's kind of like having A New Hope retold in a way where you know what is important and why. Back when that movie came out, there was much that the audience didn't know about the characters and the story. And now it's all told with the awareness of certain things--without exactly telling them. If that makes sense. And it's also like having the story retold so that it lingers on what have become our favorite bits, the things we've rallied around. There's more emphasis on what makes Leia's spirit great, on the way the X-wings fly, on the fact that Luke treats R2 more like a person than a droid, that sort of thing.

There is also more of a chance (despite the fairly short length) to linger on things it's easy to forget. In the movie, Luke has that one moment where he looks down in mourning of his aunt and uncle and then he never mentions them again--I don't think the novelizations were any different, either, if I remember right. And Leia looks in shock when Alderaan is destroyed, but she never talks about the fact that her home and family were just destroyed in front of her eyes. So I was glad that they had the chance in here to take their moment of grief and also to look back on it later on and use it to help them remember why they are fighting against the Empire.

The princess who leads a rebellion against oppression, the scoundrel who knows he can't fight just for his own skin, and the farm boy who takes his journey all the way from the desert to becoming a Jedi and right back to reminding his father of something so simple as love for another person.

Labels: A New Hope, Alexandra Bracken, Star Wars, The Princess the Scoundrel and the Farm Boy