I know, I'm late posting and I'm stacking Star Wars posts again, but I have been busy with things, so I'll just set this post down because it's ready to go, even though I have others planned.

Well, well, I am so glad. In the young reader retellings of the original trilogy, I enjoyed the first book and quite well disliked the second--but am happy to report that the third one (full title: Return of the Jedi: Beware the Power of the Dark Side!) brought the level back up. True, it's a completely different reading experience from the original Return of the Jedi novelization, but it's still good. 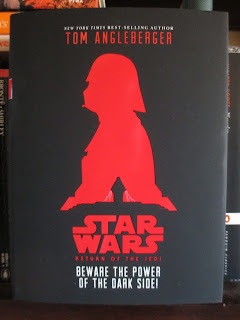 Tom Angleberger may have taken even more of a neutral stance than Alexandra Bracken did with her narrative: he's just telling a story, sticking to simple terms and descriptions so as not to daunt his age group and sparing readers some of the details of the fights but not dumbing anything down or talking down to his readers at all. The narrative voice of this book is simple in a way that just allows you to see the characters and what's going on.

Of the three, this book also was the one to most tie in the OT with what we now know from the PT and maybe also other content. I'm referring to the slight discrepancies that exist between the two trilogies. Leia says she has slight memories of her real mother and yet in Episode III, Padme dies as soon as her children are born. In the novelization, we learn that Owen Lars was Obi-Wan's brother and so not actually Luke's uncle. R2 jumps off of Jabba's barge to fall in the sand and yet we see him flying in the PT. Things like that that don't really make sense. They're all tied in and either given an explanation or explained differently (of course Owen wasn't Obi-Wan's brother, so after the PT established that fact, I don't think anyone had the need to refer back to that discrepancy). However it works out, this is a retelling of the story we all know--but with all the details worked out and also with some connection to the characters we know from the PT (Anakin thinks back to Padme, for instance). I would recommend reading this book just for the whole connecting factors alone.

I don't exactly know why, but I love the beginning of Return of the Jedi. Maybe it's because it took me years to realize that there was an elaborate, layered plan to rescue Han. Maybe it's because this is the time that we see Luke as a Jedi for the first time (or, frankly, the first time we see any Jedi in action--because Obi-Wan's lightsaber fight with Vader in Episode IV was, well, brief and simple and more like a sword fight than anything else). Maybe it's just because I love seeing Tatooine on screen. Either way, reading the opening chapters of this book reminded me of these scenes that I love. And some of those pictures were just fantastic.

So let me take a moment to appreciate the pictures in all three of these books (though I kind of think this one had the most--am I wrong?). They're a mix of artwork from Ralph McQuarrie and Joe Johnston--I had already seen some of Ralph McQuarrie's work, but I love having it in hard copy like this. Now that's the way to illustrate a children's book: give them just as good material as you would give any other age group. They'll appreciate it just as much.

While perhaps this book doesn't give as lofty themes as the regular novelization does (all of that about nature overcoming the evil of the cold, industrialized Empire and such), it does provide explanation for all of the little things in the film that children might not perhaps realize on their own. Like I said, it took me years to realize everything about the plan in Jabba's palace--but this book explains that it's all a layered plan. Things like that. So it really would be a helpful companion piece for children who enjoyed the movie; maybe they just want to relive their favorite scenes, but they'll also gain a little more understanding of what's going on.

And I think that's it. I can't believe I've managed to get through this huge stack of Star Wars books; now I only have one left and there are still four weeks before the new movie comes out.

Posted by Deanna Skaggs at 6:20 PM

Labels: Beware the Power of the Dark Side, Return of the Jedi, Star Wars, Tom Angleberger