You know, it's possible that I might have skipped these three books if I hadn't seen them at Costco and figured that they were worth getting at Costco's prices. I thought they were going to be essentially just lengthy short stories, one for Han Solo (Smuggler's Run), one for Luke (Weapon of a Jedi), and one for Leia (Moving Target)--stories under the "young reader" label once again.

But I learned with Lost Stars that the young reader label doesn't necessarily mean a book doesn't have content. And these three "adventures" were just slightly longer than I was expecting. They're move novellas than lengthy short stories--and Leia's is probably long enough to just call a short book. 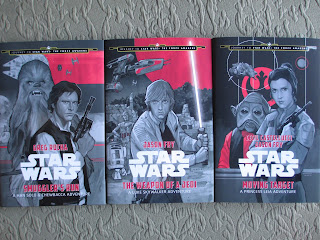 For being so short, it's a little odd that they're divided into three parts, plus the Prologue and Epilogue. And for the beginning of each section, there is a two-page illustration--I think the divisions in the book are there simply to give a place for pictures. They are good pictures, after all. They're sort of graphic novel style, in black and white and gray with some spots of red, like the covers. There is so much movement in these illustrations that I had to pause a moment to enjoy each one--I only wish that they didn't show scenes coming up instead of the ones that have just passed. I guess these aren't books where you need to be worried about spoilers, but still I wasn't entirely happy about a picture showing me what was going to happen next before I had a chance to read it.

Content-wise, they are just short adventures told fairly quickly without a lot of fluff. But it's kind of nice not to have a lot of fluff for a change. When I was reading A New Dawn, there were passages that I probably would have liked to have fast forwarded through to get straight to the characters. So with the more concise format of these three little books, I didn't have that problem. Each one has a different point that it sets out to illustrate through retelling (in frame format) a certain story.

It seems also that each book gets better as you go along. Han's is first, then Luke's, and then Leia's.

Han's story fills in the slight gap between Episodes IV and V to explain his growing interest in the Rebellion and its ideals. It also shows off his skills. Pretty straightforward. The "hints" at Episode VII are . . . slight and yet interesting. It feels like things that seem very insignificant now will gain much more meaning after the new movie comes out.

Luke's story is almost a continuation of Heir to the Jedi: Luke is continuing his quest to find out more about the Jedi now that his one living link to them is gone. That's all fun to watch--though I do wish he had done a little more or learned a little more at the temple. But then again, part of the message of this book seemed to be a lesson about patience, so I suppose it's fitting that Luke had to spend a lot of time slowly learning. The frame story in his book is the smallest out of the three--it's also the only one (I think) that takes place within the time frame of the OT and is definitely the only one where the character in question isn't actually present. These details must be significant.

Leia's story is on the grandest scale of the three and also involves the most stages. Being that her team's actions help lead to the final battle in Episode VI, it's a story I already felt invested in, even if it brought me to new worlds and new characters. The theme here was very worth noting. Star Wars is strange because it's in many ways about embracing and promoting peace--and yet it always has war. So this book helped explain that balance and the reasoning behind holding to the one philosophy (peace) while taking part in the cruel and chaotic action of war. The topic is duty--but the lesson is about the importance of the ties that bind different people together. And the hints in this book--well, Leia's acting very Force-sensitive, which of course she does a lot of in Episode VI, too (not quite as much in IV and V). And then there is that mention of names at the end of the book, giving us an idea of timelines (in relation to Episode VII). Once again, it feels like all the information is right there in front of us--just not quite decipherable until we've seen the movie. I feel like I'm missing a very important puzzle piece that will seem obvious once I get it but that I can't grasp on my own.

Just over a month from now.
Posted by Deanna Skaggs at 12:03 PM