So You Want to Play Being a Jedi?

I don't know how this happened. In the young readers' retelling of the Star Wars original trilogy, I really enjoyed the first installment for A New Hope. But I don't understand the approach to The Empire Strikes Back at all. The full title is The Empire Strikes Back: So You Want to Be a Jedi? and perhaps that is where the complications begin. 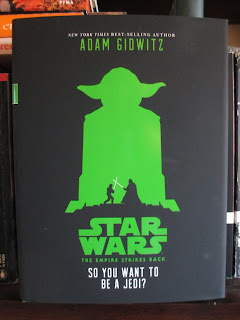 It's strange because Adam Gidwitz stresses in his author's note that his background is in writing fairy tales, saying that Star Wars is essentially a fairy tale, as well. I agree that it's fantasy, so why do I disagree so much with the approach to this book? Let me try and break it down.

The entire book is told in present tense, which is fairly common these days. It's fine; it works. About half of it is in third person but all of Luke's sections are in the less commonly used second person. The reasoning behind it is that Luke is the character the audience is supposed to be able to see themselves as. Okay, I get that. But those sections of the book aren't just told in second person: they're written as if it is literally you in the story. Which is odd for many reasons. One reason is when the narrator is trying to spare you the mushy parts and tells you that saying that Leia kissed you is necessary, though, so that you can wipe off the kiss or whatever: that's just weird (and what's with all the talk about the mushy parts of the story? If you talk less about how it's necessary to include Han and Leia having a lovers' quarrel, then you can just state it and get it over with if you think your audience really doesn't want to hear it). Another reason for the oddness of the second person perspective is that it gives you no one to strive to be like. Do you see what I mean? Instead of this perspective making me feel closer to the story, all it did was put up a wall. I don't want to be me in the story: I want to see myself in the characters. There's a big difference, even if there are "shell characters" that are intended to be filled in by the audience. So while second person might have been okay, I don't like the way it was used at all.

Then there is something about the narration that almost reminds me of C.S. Lewis in The Chronicles of Narnia, which confuses me because I like Narnia but I didn't like this narrative style. The narrator is constantly making comparisons to things in our world that pull you our of the story: saying R2 looks like a trash can (which is rather rude, isn't it?) and such. And he also refers a lot to the reader, reacting to what he imagines the reader's response is and that sort of thing. I don't always (maybe sometimes) mind when Lewis does this in Narnia because it just adds to the vintage feel and he kind of does sound like an old uncle telling you this story. But in this book, the style just bothered me. It made me feel like the author was talking down to me. I said that The Princess, the Scoundrel, and the Farm Boy seemed like it was for ages 10-12; this one feels more like age eight. I complain all the more because I think Star Wars is great at challenging children's capacity for understanding, so you kind of want to keep the style as elevated and adult as you can. I think.

And the third thing is the worst of all. At the end of most chapters, there is a short Jedi lesson, usually one to three pages. It usually involves telling you to stop what you're doing and meditate, often while having something throw soft objects at you. I'm not even kidding. Tell me how that is helpful or even entertaining. Okay, so the book is obviously trying to place the most emphasis on the Jedi training aspect of this story. Okay. That is important. But applicability, applicability is the problem. Star Wars can be applicable to a person's real life in the themes that it presents, not in lessons about meditating. If you want children to learn something from a story, make the themes about patience, kindness, understanding, and resisting negative impulses very clear. Don't try and bottle them into weird activities--that involve the throwing objects (I'm picturing a sock or pillow knocking over a lamp or a naughty friend/relative throwing a not as soft object--did no one find these suggestions a liability?). And anyway, this isn't supposed to be an activity book. You have children sitting with a book in their hands and you really want them to put that book down to throw things at each other instead? Really? Let's not mention what teachers will do if any children ask them if they can perform these activities during class reading time. And anyway, even if you do ignore the activities in the lessons (which I imagine most people will. Even if some children want to do them at first, there are so many and they're all basically the same that I can't see everyone doing all of them), then you still have all that wasted space that could have been spent on the story instead.

The book wasn't all bad. But the good passages were far outweighed by the mediocre ones. I always felt like there was a wall between me and the story and so I could never really get into it. (The problem is not that it is written for children: some of my favorite books are children's books, some of which I read for the first time as an adult.) This book was very disappointing.

Posted by Deanna Skaggs at 9:45 PM