What Do You Celebrate? Thanksgiving Edition

I used to think of Thanksgiving as the day that initiates the holiday season, but now I see so much in Thanksgiving itself that I don't think that phrase holds true for me anymore, though it perhaps still does for many people.

Over the years, I've been putting more and more emphasis on Thanksgiving. At first it had a lot to do with the turkeys. I don't know why, but I love turkeys. In third grade, we had a tokens system where we collected "money" from turning in assignments or being good in class, that sort of thing; every so often, our teacher would set out a "store" where we could buy things with our tokens. And one time she set out a turkey made of wood or grasses or something like that; my friend and I were talking about what colors we would paint it if we got it. Then we learned that it was 500 tokens, which was pretty well out of most people's tokens budgets; I, however, had enough. So I very proudly went up to get my turkey and I still set it out every year--sixteen years later. Someone in my family even found a smaller version of it for sale somewhere, so now my turkey has a little brother. 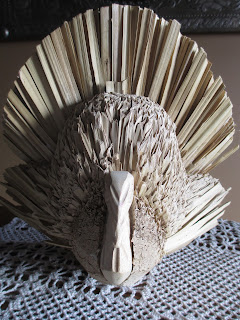 I always want there to be more Thanksgiving things in stores and I get excited whenever there is something just because there is usually very little. I guess what else can they sell besides turkeys, pilgrims, pumpkins, and cornucopias? But still, I want there to be more. Every year, I make molasses crinkles around November; I've started making sugar cookie turkeys to accompany them, which always seems to delight people. Movie-wise, Thanksgiving stories are usually about families complaining while dinner is cooking and then realizing that they like each other despite the arguments by the time the food is ready--so there isn't much to choose from that's any much good. But last year I did find a good one; it's called An Old-Fashioned Thanksgiving. It's a period movie from a few years ago and I thought it was nicely done, so I would recommend you watch it (it's based on a Louisa May Alcott story that I haven't read yet). Snoopy also has some good Thanksgiving cartoons if you catch them when they're on TV.

While I prefer cooking at home versus eating out or buying food to heat, most of us can agree that daily cooking is on a much smaller scale than Thanksgiving cooking--no matter how small a group you're cooking for. But that's exactly what makes Thanksgiving cooking exciting. It's the only time of year that I buy a whole turkey, so it's kind of fun to clean it and season it and babysit it in the oven (I've never done the carving myself). This year actually I think we're going to try and cook it in the barbecue grill, which should be interesting. Then there are all the sides. Pumpkin pie is a big thing in my house: we usually all pitch in the day before to make them and we've finally found a good pie crust recipe (well, years ago we had a good one and then lost it--it took us a while to get another decent one). Last year I made the rolls myself for the first time. Mashed potatoes to boil and prepare. I make the stuffing now, too, so there's toasting the bread and everything now, too. Some sort of vegetable, as well. There are a lot of steps and ingredients, so I start planning well ahead of time and most of the day (and the day before) ends up being devoted to cooking. It's nice to have focus on something simple like the preparation of food.

And now we move on to the Thanksgiving table. In my house, we usually like a semi-formal type of table and usually to get dressed up kind of nice--but to also act very informally. Prettiness and comfort in one, I guess. Sometimes I wear a nice dress with my turkey socks just because I can. Now, most of my extended family doesn't live nearby anymore, so majority of the time Thanksgiving has been a smaller affair, six to eight people tops. These days it's even smaller. Yet while it isn't about seeing relatives you don't usually get to spend much time with (as I know it is for many people), Thanksgiving can still be a day to enjoy and appreciate family. It's the day where you all take a moment to hang around each other, to break bread together and to trade conversation. Even if you only spend Thanksgiving with people you see fairly often, it's still important to appreciate these people--and if Thanksgiving is the day to remind us to appreciate, then that is a good thing.

Wow. Sometimes I'm almost blown away by what Thanksgiving represents. Sometimes I think we are too focused these days on explaining why the Thanksgiving story has nothing to do with actual events and surrounding circumstances--but doing that takes too much emphasis away from Thanksgiving the myth. The myth has a beautiful theme, and it's the theme that's important--and it is lovely that it's a national myth and a national theme. It's the theme of getting along with the people around you (which can apply to family, friends, neighbors, coworkers, etc.), of sharing what you have graciously and receiving gifts gratefully, and of being thankful for life, health, safety, sustenance, and companionship.

Thanksgiving is like a prayer. Taking in your surroundings, seeing what is good, and asking to be better because you have been given something good.